A new satellite image released by the National Oceanic and Atmospheric Administration (NOAA) shows North America surrounded by a total of four storms as well as wildfire smoke.

The image was captured by NOAA's Geostationary Operational Environmental Satellite 16 (GOES-16), which is formerly known as the GOES-R satellite.

The new satellite image taken by the GOES-16 satellite and released by NOAA shows North America surrounded by two hurricanes, Grace and Lina. Two tropical storms, Fred and Henri, also surround the continent as seen in the satellite image.

According to Space, even the smoke from the wildfires happening in California is seen in the new satellite image. The image was taken by the GOES-16 satellite on August 18.

"The pace of hurricane activity around North America often accelerates in mid-to-late summer as seas warm, making it easier for tropical cyclones to develop and intensify. August 2021 was no exception," according to the National Aeronautics and Space Administration (NASA).

The GOES-16 satellite was able to take the image using its Advanced Baseline Imager (ABI), per the report by Space.

Identifying the Hurricanes and Storms in GOES-16 Satellite Image 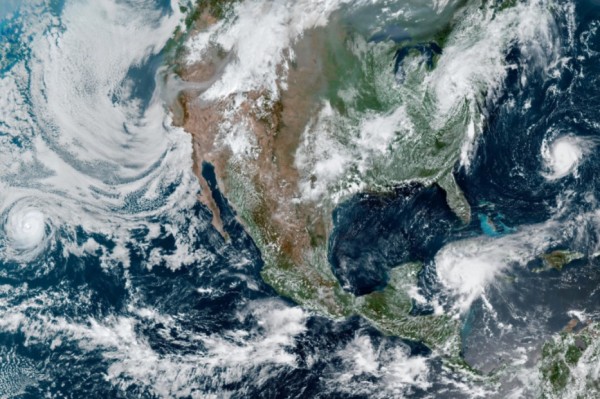 The satellite image taken from the GOES-16 satellite shows Hurricane Grace in the bottom right corner of the image. Hurricane Grace recently drenched Haiti with heavy rainfall, making it all the more difficult for its people to conduct search and rescue operations following the 7.2 earthquake that happened on August 14.

Hurricane Linda, on the other hand, can be spotted on the left side of the image. Per the report by Space, Hurricane Linda did not go anywhere near land. Per NASA, Linda was eventually categorized as a Category 4 hurricane due to its winds that reached 130 mph despite it staying at sea.

What is the GOES-16 Satellite?

The GOES-16 satellite is part of the GOES Satellite Network and, as its name suggests, has a geostationary status. This means that the satellite stays in the same position and provides "constant vigil for the atmospheric 'triggers' for severe weather conditions such as tornadoes, flash floods, hail storms and hurricanes," according to NASA.

The GOES-16 satellite was formerly known as GOES-R and launched in 2016 from Cape Canaveral.