Windows 11: Test the Software Without Installing Beta or Upgrading Hardware via Browser

Windows 11 can be "software tested" online, and it would help in giving users a preview of the Microsoft operating system without needing to install it or proceed with the beta.

The entire process would be done via the web browser of a desktop, and it would help in giving people an insight and "feels" of what the next-generation operating system would be like.

Microsoft's Windows 11 have already launched its software for the public, but it is not yet a full release from the company, as it is still under development and a beta software test. Nevertheless, there are already a lot of features that have been debuted by the new OS version, particularly to native apps. 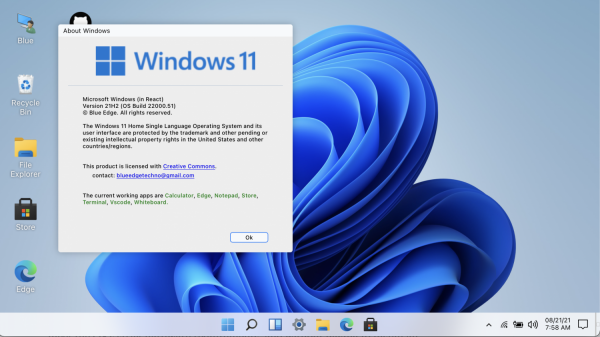 Windows 11 has been a massive software ever since Microsoft launched it last June 24, and Microsoft fans have all been eager to test the application via its beta test, which not everyone can download.

There are plenty of reasons for these restrictions, and one of them is the computer's system requirements, another is hesitance to install the software and plenty more. If users are wary to install the Beta or upgrade their software before testing Windows 11, there is a way to map and explore it, without the need to download it.

A platform called "Blue Edge" features a mirror look of a Windows 11 homepage, but is available online. It is accessible on all browsers, and it may even run via smartphones as long as users select the desktop version.

Blue Edge's Windows 11 features the nooks and crannies of the operating system, and how it would "feel" like when the actual OS or update comes for Windows users. The platform of Blue Edge helps give the same features as the beta version, without having to install it immediately.

It is known that Microsoft's Windows 11 has one of the strictest requirements for its latest operating system, meaning that not everyone could upgrade or download the beta.

Furthermore, not everyone prefers to try out the beta version or wants to use the initial versions of Windows 11, as it could have a lot of bugs that they feel might endanger their devices.

Windows 11: Is it Worth it to Install Beta?

Users can still use the Blue Edge online trial version of Windows 11, after having installed its Beta. But if users would like to map out how it would initially feel, then the browser trial method would be the most ideal one to go with, for this venture.

The idea of a beta is to give a first look at how a service or app would perform, and it is essentially a version of the certain OS or app already but is only not finished. A hands-on experience would be giving a person an initial knowledge about it, giving them the choice to upgrade or not.

It is still up to users if they want the Windows 11 beta version, or stick with the web browser to test if Windows 11 is for them.