NASA has finished testing its James Webb telescope and is now sending it to Europe's spaceport for its imminent launch. 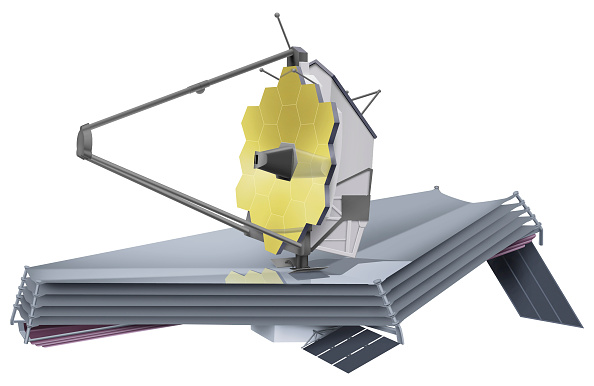 (Photo : QAI Publishing/Universal Images Group via Getty Images)
James Webb Space Telescope, Large infrared space telescope set to be launched in 2018. Its principal mission will be to observe the first galaxies formed after the Big Bang.

The Webb telescope is now being prepared to depart the French Guiana spaceport, reports Phys.org. It underwent its final tests inside the Northrop Grumman facility in California to ensure that it will work as intended while it's in orbit. To reach French Guiana in South America, NASA will be sending Webb through the Panama Canal.

As soon as it arrives at Europe's Spaceport, NASA will oversee the deployment of launch processing teams to set the James Webb Telescope up for its flight. This will include anything from post-shipment checkouts to filling up the propellant tanks with fuel. After that, teams of engineers will connect the telescope to its Ariane 5 rocket launch vehicle, provided by the European Space Agency (ESA).

Once all pre-flight preparations are done, NASA will be launching Webb either by November or early December 2021 due to multiple launch delays. Initially, the agency planned to launch Webb on Halloween, reports Space.com.

But despite these delays, NASA will be able to launch the much-anticipated successor to the aging, yet iconic Hubble Space Telescope, which has experienced several hardware issues during the past few months.

NASA James Webb: The Largest of its Kind

Perhaps the biggest issue with the James Webb Telescope is how big NASA made it. It is an absolutely massive device with an equally sizable price tag of $10 billion. Just its primary mirror alone already measures an astounding 21 feet, 4 inches. Its total size made it the largest observatory that NASA has ever made.

This size is the main reason why it's being transported through the Panama Canal--by ship. While there aren't any actual dimensions provided of the entire telescope, one can infer its size by how big its sunshield is. According to RMG.co.uk, Webb's sunshield is half the size of a Boeing 737 airliner or around the size of a regulation tennis court. And that's just the sunshield!

But why is it so big? NASA made sure that to date, the Webb telescope is the most powerful one of its kind to ever be built. To be able to accomplish its mission of seeing through the farthest reaches of the universe (literally), it has to have enough room to house its components.

All of the tech that NASA is equipping Webb will enable it to look for the earliest, oldest stars and galaxies: the ones which were immediately created after the Big Bang. According to the Canadian Government's website, Webb is expected to help astronomers better understand how heavenly bodies such as planets, stars, and entire galaxies are created and evolve over time.

Furthermore, NASA also hopes that the telescope will be able to determine the potential for life on other distant worlds.

Read also: NASA Plans To Study, NOT MINE, A 'Goldmine' Asteroid Worth QUADRILLIONS By 2026

[VIDEO] NASA's Webb Telescope Deployed: How Big It Is?