SpaceX launches could face some delays due to the liquid oxygen supply shortage brought upon by the raging surge of the COVID-19 Delta variant in the United States. 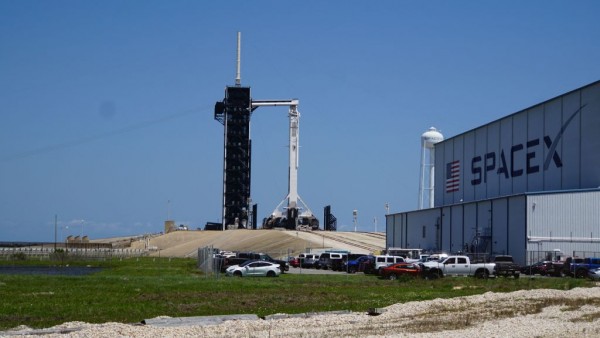 (Photo : by GIANRIGO MARLETTA/AFP via Getty Images)
SpaceX Falcon 9 rocket, seen on the launch pad at Launch Complex 39A less that 24 hours before it is scheduled to launch for its Crew-2 mission, at NASAs Kennedy Space Center in Florida, April 22, 2021. - A crewed SpaceX mission to the International Space Station has been postponed by a day due to weather concerns downrange of the launch site, NASA said Wednesday.

It is to note that liquid oxygen is being used for ventilator treatment of some COVID patients who are experiencing severe symptoms. As such, there is now a threat to its supply as the Delta variant has been increasing the cases in the second year of the pandemic.

The SpaceX founder revealed last Aug. 12 that the Starship's tank is only filled with 22% of fuel, whereas the remaining percentage consists of liquid oxygen.

Musk further clarified that the spacecraft does not refuel. Instead, it just refills its tank as the majority of Raptor Engines does not consist of fuel.

It is also worth noting that even the previous engines of the Starship, namely the Merlin and Kestrel, similarly used liquid oxygen to run.

What sets the former machines apart from the Raptor is their use of refined kerosene instead of methane.

As per Space.com, SpaceX President and Chief Operating Officer, Gwynne Shotwell echoed Musk during the 36th annual Space Symposium, saying that the launch providers are dependent on liquid oxygen,  or shortly known as LOX.

That said, Shotwell further disclosed that the shortage of LOX could likely badly impart the upcoming launches of SpaceX for the whole of 2021.

She further noted that "we certainly are going to make sure hospitals have liquid oxygen that we need."

Additionally, the SpaceX exec invited anyone who has space LOX to send Shotwell an email.

Meanwhile, SpaceNews reported that the increased demand in LOX has been affecting the whole supply chain. For instance, the Orlando Utilities Commission in Florida revealed that its liquid oxygen shipment has already been cut by half or 50%.

However, Shotwell has yet to unveil the impact of the shortage to the nearing launch of the SpaceX Falcon 9 on Aug. 28 for the Dragon cargo mission of NASA or the National Aeronautics and Space Administration in the International Space Station from the Kennedy Space Center.

To add, SpaceX has already faced some hiccups since June 30, pausing its Falcon 9 rocket launches to add laser tech to Starlink's satellites. As such, the space company figured in a two-month hiatus.

Speaking of Starlink satellites, Shotwell also mentioned that its next launch is possibly occurring in the next three weeks.