This Suez Canal-inspired game that goes by the name "Whatever" allows its players to drift the stuck cargo ship along the narrow waterway--at least virtually. 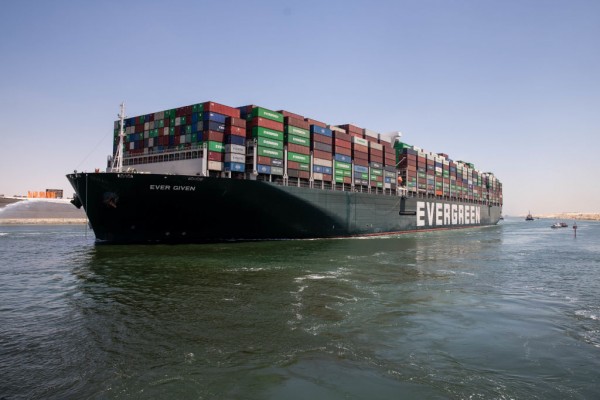 (Photo : by Roger Anis/Getty Images)
ISMAILIA, EGYPT - JULY 07: Evergreen ship leaves Suez Canal to the Mediterranean after the signing of the settlement contract, on July 7, 2021 in Ismailia, Egypt. The ship had become lodged in the canal in March, requiring a six-day salvage operation to free the vessel. The canal authority and Egyptian government detained the ship for months while they sought compensation from its owners for the economic fallout of the accident.

If it is still not obvious, "Whatever" is inspired by true events wherein an Ever Green shipping vessel blocked the Suez Canal in Egypt after it got stuck last March 23.

The cargo ship remained in the Suez Canal for six days until March 29. That's nearly a week of making the primary passageway of shipping vessels useless.

If you think that you could do a better job than the captain of the Ever Green ship, then you might find "Whatever" an easy game to play--or so you thought.

"Whatever" is an indie simulation game that allows its users to encounter the narrow passages of the Suez Canal by driving a massive shipping boat virtually.

As per IGN, the game is difficult to play.

By the looks of it from the screenshots of the "Whatever," some waterways are seemingly too narrow to drive an extremely huge ship without getting stuck.

The developer of the game, Napas Torteeka, further warned on the Steam page of Whatever that "you will cry and finally realize how amazing every cargo ship's caption is."

Torteeka added that the massive size of the 200,000-tonne cargo ship, along with the play of inertia, makes driving it in the canal "extremely hard."

It also turned out that the Suez Canal-inspired game is the first that the developer has developed in the past 15 years.

Torteeka revealed that his curiosity made him go the extra mile to understand how the shipment got stuck in the waterway, noting that "WHATEVER is my attempt to answer that question."

It is worth noting though that the cargo ship in the game does not carry the same name as the real one, which is Ever Green.

Instead, the massive boat is called "Whatever."

Players of the game need to collect coins, but they could only do so if they deliver the goods that the cargo ship is carrying safely.

However, "Whatever" further made it difficult to pass through the narrow canal by including natural disasters like whirlpools, and wind gusts.

Not to mention that extraterrestrial beings are also on the lookout to abduct the cargo ship.

According to HappyMag.TV, the Suez Canal-inspired game is free to download on Steam.

However, the gaming title is only available as an "early access."

The developer explained that he is still collecting feedback from regular users of the game to further make it more playable. But, Torteeka has yet to announce the stable release of the game.

Elsewhere, "Microsoft Flight Simulator 2020" included the Ever Green ship that got stuck on the Suez Canal.