The National Aeronautics and Space Administration (NASA) has announced that the Perseverance rover has successfully collected its second Martian rock sample.

The successful second rock sample collection happened just a few days after the Mars rover made a second attempt at collecting its first sample.

While the first attempt in collecting the first rock sample ended up in failure, the second attempt was a success.

Both rock samples collected by the Mars rover will be brought to Earth in the 2030s. Until then, the Perseverance rover will continue collecting more samples as well as looking for signs of life in the Jezero Crater. 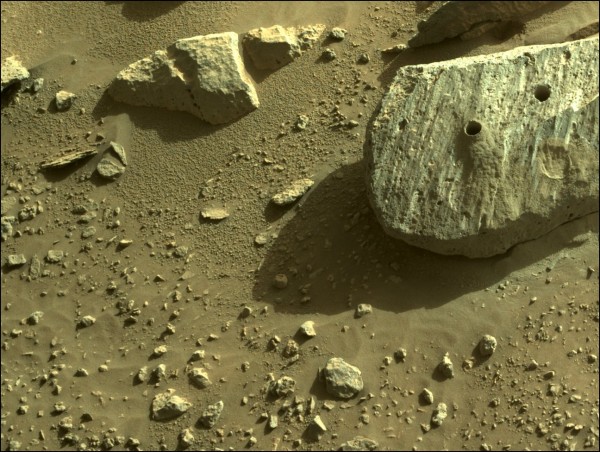 NASA's Perseverance rover has successfully collected its second rock sample. The rock sample was taken from a Martian rock nicknamed "Rochette." The first sample also came from this rock.

A tweet posted by the Perseverance's Twitter account reads, "Two for two: I have successfully processed and stored my second sample of Mars, thus bringing my total to two Martian rock cores in one week."

According to a report by Space, the second rock sample has already been stored in a titanium tube.

It was reported here on Tech Times yesterday that NASA and its Perseverance Rover were gearing up for the second collection of a Martian rock sample.

The Perseverance rover had two attempts at its first rock sample collection after it failed in its first attempt. The first attempt, which took place on August 5, yielded a rock sample that eventually crumbled and was deemed unusable for study.

The Mars rover's second attempt proved to be successful, and photos of the first Martian rock sample have been shared by NASA.

The Perseverance rover, along with the Ingenuity helicopter, is part of the Mars 2020 Exploration Program. Both spacecraft were launched from the Cape Canaveral Space Force Station in Florida last July 20, 2020.

The Perseverance and the Ingenuity touched down on Mars on February 18 with the helicopter tucked inside the Mars rover. Specifically, the landing happened in the Jezero Crater of the planet.

According to the report by Space, the Perseverance rover "supported and documented the first few flights of NASA's technology-demonstrating Ingenuity helicopter" during the early part of its mission.

The Mars rover's main mission, however, is to collect samples from Mars and to look for signs of life in the Jezero Crater.

As for the Ingenuity helicopter, it was only initially expected to do four flights on Mars. The success of these flights, however, prompted NASA to continue the helicopter's mission. The Ingenuity recently completed its 13th successful flight.