The open beta for Starlink satellite internet will arrive in October, according to the latest tweet of Elon Musk, the CEO of SpaceX. 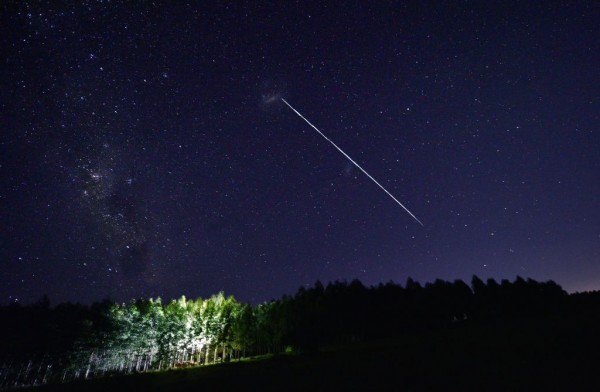 (Photo : MARIANA SUAREZ/AFP via Getty Images)
This long-exposure image shows a trail of a group of SpaceX's Starlink satellites passing over Uruguay as seen from the countryside some 185 km north of Montevideo near Capilla del Sauce, Florida Department, on February 6, 2021.

According to a report by The Verge on Saturday, Sept.18, Musk has previously revealed in August that 100,000 terminals of satellite internet will be shipped in 14 countries.

Moreover, SpaceX shared its plans for the worldwide expansion of its internet service. Most importantly, the 100,000 satellites will eventually grow in numbers to serve more users globally.

Musk predicted that by the time that the open beta phase concludes, the population of Starlink users could reach 500,000.

Next month, we will witness if his prediction will come true.

Initially, SpaceX will target those users who are based in rural areas. Its Starlink internet is said to have an impressive speed that is much better than the standard internet provider.

From another report by Ars Technica, the beta user will be requested to pay a fee of $499 intended for the user terminal. This fee is a one-time payment.

Besides the user terminal, the consumer will receive a router and a mounting tripod. With the addition of these accessories, there will be an extra monthly fee of $99.

At the time of writing, SpaceX has not yet updated its pricing options for the users. When the beta arrives in October, more details about it will be announced.

As per Gwynne Shotwell, the president of SpaceX, the company is swerving away from the "tiered pricing" of its service. They are sticking to this option to provide more transparency to all consumers.

Back in April, Shotwell said that they would maintain the Starlink in beta phase until they improve its service to a high level.

What we know so far about Musk's space venture is its capability to release 12,000 satellites in space.

SpaceX eyes to launch another batch of 30,000 satellites through a request from the Federal Communications Commission.

In June, Musk stated that his internet-providing satellite service will be offering more coverage to all users by September. In line with the venture, Shotwell aims to deliver more internet access even to the far-flung areas on Earth.

The internet has become a necessity for all individuals who want to stay connected online. SpaceX recorded that last May, there were more than 500,000 Starlink orders that came from the customers.

At that time, what SpaceX wants to happen is by 2027, the internet satellites in space would be around 42,000.

Indeed, Musk's SpaceX is currently on a big mission. The role of Starlink would be a big contribution in the field of the internet that would reach all sectors from around the world.