SpaceX Inspiration4 crew's cute plush puppy stuffed toy is based on two real-life dogs working at the St. Jude Children's Research Hospital, and it has flown to orbit. 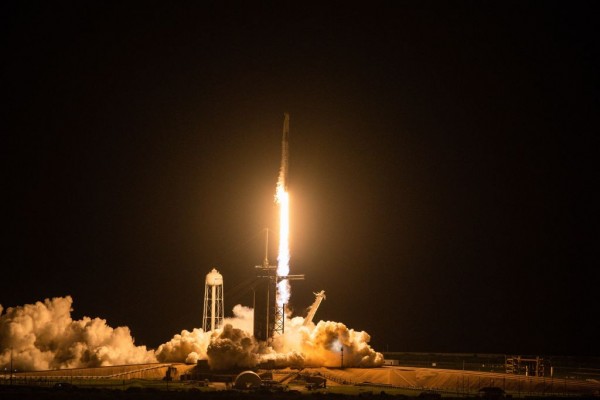 (Photo : by CHANDAN KHANNA/AFP via Getty Images)
The SpaceX Falcon 9 rocket carrying the Inspiration4 crew launches from Pad 39A at NASA's Kennedy Space Center in Cape Canaveral, Florida on September 15, 2021. - The Inspiration4 mission, the first to send an all-civilian crew to orbit, will venture deeper into space than the International Space Station.

It turns out that the first tourist crew of SpaceX dubbed the Inspiration4 went out to orbit with a fluffy toy.

The Inspiration4 mission is funded by billionaire businessman Jared Isaacman, who was also part of the crewed flight sitting as the captain.

The billionaire is also joined by other civilians, namely, Hayley Arceneaux, a physician assistant; Chris Sembroski, an engineer; and Dr. Sian Proctor, a science communicator.

This flight marks a milestone of the first flight without any astronaut included.

Unlike the civilian flights of Jeff Bezos via his space firm known as Blue Origin, and the mission of Sir Richard Branson with his own Virgin Galactic, the Inspiration4 has different objectives.

Aside from studying the health of humans during space flights, the proceeds of the auction that the crew will be conducted after the mission will go straight to the funding of the St. Jude Children's Research Hospital.

It is worth noting that the Inspiration4 mission seeks to raise $200 million for the St. Jude Hospital.

Read Also: SpaceX's Inspiration4 is Launching Next Week Aboard the Dragon, And the Mission is a Go

As per Business Insider, the Inspiration4 crew is accompanied by a dog stuffed toy wearing a spacesuit similar to the other members of the flight.

The cute plush puppy is based on two real-life dogs found on the St. Jude Children's Research Hospital that goes by the name Puggle and Huckleberry.

The two dogs, a golden retriever and goldendoodle, work at the children's hospital as comfort pets for the cancer patients of the facilities who are still under ongoing treatment.

The goldendoodle and golden retriever started their task at the hospital last 2019, straight from a service-dog school.

.@Inspiration4 has reached zero gravity and unleashed their zero gravity indicator! Check out our gift shop to get your own space buddy dog plush inspired by specially trained facility dogs, Huckleberry and Puggle! https://t.co/PhXFZDTQzG pic.twitter.com/jAgLqgizaL

That said, the stuffed toy that flew space was inspired by the two dogs that comfort the children battling cancer in the hospital.

One of the crew members, Arceneaux, further explained during their space broadcast that both Puggle and Huckleberry accompany the children with cancer when they are feeling scared.

What's more, the two dogs even go the extra mile to go to the MRI machine or the CAT scan to show the kids that it is okay to enter these medical devices.

Arceneaux also said that it was the reason that Inspiration4 wanted to bring the sweet dogs to space, at least in the flesh of a stuffed toy.

It is to note that Arceneaux is one of the physician-assistant of St. Jude, that is why she knows about the stories of the children battling the illness inside the hospital.