NASA InSight Lander recorded the three biggest Mars quakes with more than magnitude 4. One of the massive quakes even lasted for over an hour. 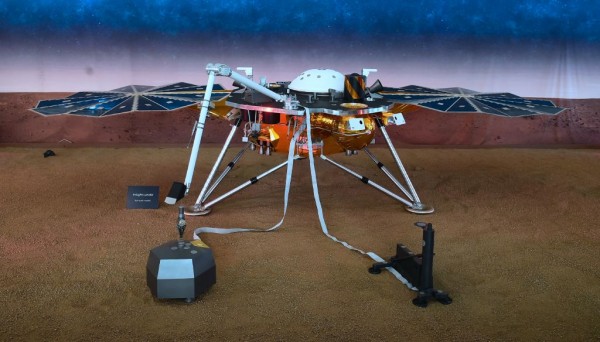 (Photo : by FREDERIC J. BROWN/AFP via Getty Images)
A replica of the InSight Mars Lander is on display at the NASA Jet Propulsion Laboratory (JPL) in Pasadena, California on November 26, 2018 as excitement builds ahead of today's scheduled noontime (PST) landing of the spacecraft.

The NASA InSight or the Interior Exploration using Seismic Investigations, Geodesy, and Heat Transport lander has been detecting and recording numerous Mars quakes since it was first deployed in the Red Planet last Nov. 2018.

Last April 2, the InSight Lander has already logged more than 500 Marsquakes. However, as of the latest data, the robot was able to detect over 700 tremors.

The NASA lander also previously discovered that the Cerberus Fossae is the center of the seismic activity on the Martian planet.

Although Earth also experiences its surface shaking due to the tectonic plates, Mars, on the other hand, encounters quakes due to the volcanic activities in the Red Planet.

As per Insider, the NASA InSight lander recorded a magnitude 4.2 Mars quake, which lasted for almost an hour and a half. After the robotic lander experienced a long and massive quake, it sent the data from the Red Planet to the Earth.

On top of that, NASA recorded two similar Marsquakes to the latest massive one last Aug 25, which were at magnitude 4.1 and magnitude 4.2.

According to Space.com, the researchers of the NASA mission further discovered that the 4.2 magnitude quake originated approximately 5,280 miles from the location of the InSight lander.

NASA went on to reveal that the massive tremor was the farthest quake that the robot was able to record from the Red Planet.

On the other hand, the epicenter of the two shocks last Aug. 25 is still unknown.

It is worth noting that previously the record-breaking quake magnitude that the InSight detected was only at 3.7 way back in 2019. After nearly three years, the shaking in the surface of the Martian planet seemed to have intensified. It is to add that the latest massive 4.2 magnitude quake was reportedly five times more energetic when compared to the 2019 record.

Mars Quakes and the Red Planet

NASA is getting to know more about the mysterious Red Planet due to the quakes recorded on Mars. The space agency has already discovered via the quake data that the crust of the Martian planet is thinner than initially assumed.

What's more, NASA discovered that the surface of the Red Planet is much similar to the crust of the moon than of the Earth.

It is worth adding that the dry and broken surface of Mars results in longer tremors than earthquakes.

To be precise, the shaking intensifies due to the reverberation in between the cracks of the planet's crust. As such, on average Mars quakes last for 10 to 40 minutes.

Related Article: NASA's InSight Lander Is Back To Drilling On Mars After Getting Stuck For 6 Months