Windows 11's "Seamless Updates," which seeks to make its updates less of a hassle than its predecessor, gets a detailed explanation from Microsoft on how it works. 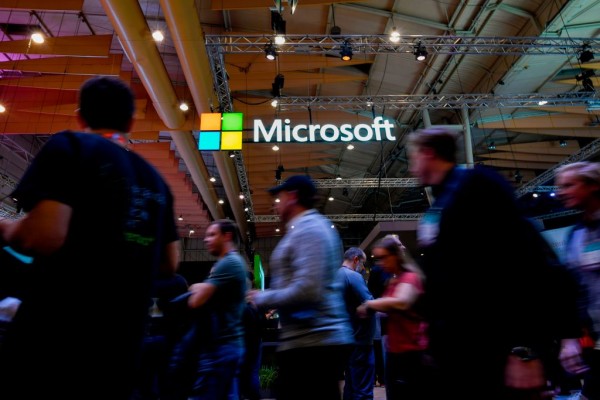 (Photo : by PATRICIA DE MELO MOREIRA/AFP /AFP via Getty Images)
Attendees walk past the logo of US multinational technology company Microsoft during the Web Summit in Lisbon on November 6, 2019. - Europe's largest tech event Web Summit is held at Parque das Nacoes in Lisbon from November 4 to November 7.

As per XDA-Developers, the tech giant, Microsoft, claimed as it unveiled the next-gen operating system last June that updates on the Windows 11 will be 40% smaller than Windows 10.

Microsoft mentioned the massive change on Windows 11 just minutes after the launch event began, noting that the updates will occur silently in the background.

As such, it was expected that Microsoft will be delivering Windows 11 updates in a less painful manner for its users with its smaller and quieter update method.

It is worth noting that Windows 10 users are faced with a much-complicated updating process, requiring them to restart their PC while a blue screen pops up for a couple of minutes.

With that latest development on Windows 11, it seems that Microsoft was aware of the problem all along, taking this opportunity to work on the hassle update process.

However, the tech giant behind the Windows software did not elaborate as to how the smaller update will work during the announcement.

According to WindowsLatest, Microsoft has finally explained how the "seamless updates" of the latest Windows work.

The new "seamless updates" are made possible by multiple factors that Microsoft intentionally changed for improvement.

Although Windows 11 still follows the same servicing model of its previous generation, which rolls out new updates every month, the new OS boasts something different--an annual feature update model.

As such, Windows 11 users will get lesser feature updates, making the monthly updates even smaller and lighter. Thus, users will only be receiving updates related to features once a year.

What's more, Microsoft will also deliver the updates in the background.

However, to avoid eating up bandwidth or computing performance, it will be downloaded automatically while users are not actively using their machines.

The tech giant will be able to detect the inactive hours of users via the AI/ML tech introduced on Windows 11. This new feature will help Microsoft to live up to its promise of less impactful updates.

On top of that, the update engine of Windows 11 also received some improvements in terms of optimizations.

One of which allows the update engine to determine which files are already available in the PC that is a duplicate of what is in the new package. That said, the size of the patch could go as low as 40%.

Read Also: Microsoft Relaunches Compatibility Tool That Can Tell If Your PC Can Run Windows 11, But it Has Some Problems

Windows 11 is slated to hit "general availability on Oct. 5, which eligible and current Windows 10 users will be getting for free.

Not to mention that from Oct. 5 onwards, pre-built PCs and laptops will start releasing with Windows 11 installed.

Related Article: Firefox's Notification Will Now Ask Users If They Want to Make it as Default Browser on Windows 11