Tesla took its former Chinese customers to the courts in China for defamation due to their online posts that were critical of the electric vehicle maker. 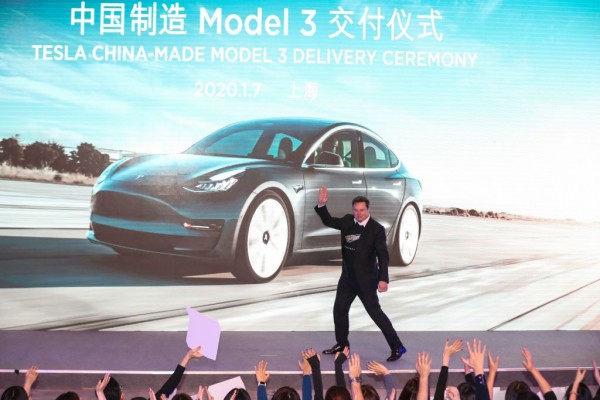 (Photo : by STR/AFP via Getty Images)
Tesla CEO Elon Musk gestures during the Tesla China-made Model 3 Delivery Ceremony in Shanghai. - Tesla CEO Elon Musk presented the first batch of made-in-China cars to ordinary buyers on January 7, 2020 in a milestone for the company's new Shanghai "giga-factory", but which comes as sales decelerate in the world's largest electric-vehicle market.

As per Electrek, the EV firm of Elon Musk, Tesla, went on to sue two Chinese customers due to their comments about his company.

To be precise, Tesla has filed hefty court charges to two of its former customers that used to drive EVs from the firm.

According to South China Morning post, Tesla brought its former customer in China, Han Chao, to court for defamation due to his multiple critical posts online, which the company specified.

The lawsuit, which was posted by Chao himself, said that Tesla is filing a lawsuit against his post that called the firm a "rogue company," "such a quack," and even "rubbish Tesla."

Tesla further claimed in the lawsuit that Chao is not only critical of Tesla on social media, but in his "offline actions" as well.

The EV company also said that his actions are influencing the public to have a "negative impression" of the Musk-led firm, leading to tainting the reputation of its brand.

In hindsight, Chao used to drive a second-hand Tesla Model S after purchasing the vehicle from the carmaker in May 2019.

The former Chinese customer noted that Tesla stated in its listing that the vehicle that he bought did not experience any major accidents, as well a "structural damage."

However, Chao claimed that the Model S broke down while he was behind the wheel after a couple of months since his purchase.

As such, the customer demanded Tesla give him a new vehicle instead. But the company did not comply but offered to replace the broken parts. So, Chao went to a third party to check the condition of the EV, wherein he found out that its C-pillar had been replaced.

Back then, the Chinese customer filed a lawsuit against Tesla and won 1 million yuan or $155,000 as compensation.

Meanwhile, Tesla also filed another lawsuit against the daughter of the ex-Tesla owner who got in an accident. It is worth noting that she was also one of the protesters in the Tesla booth during the Shanghai Auto Show.