"Maya and the Three," a Netflix Animated Event told in nine chapters, has released its official trailer. The Animated Event will premiere on Netflix on October 22, 2021.

Directed by Jorge R. Gutiérrez, who also serves as the executive producer, "Maya and the Three" follows the story of Maya, a warrior princess who suddenly finds her life forfeited to the God of War due to her family's secret past.

'Maya and the Three' Synopsis 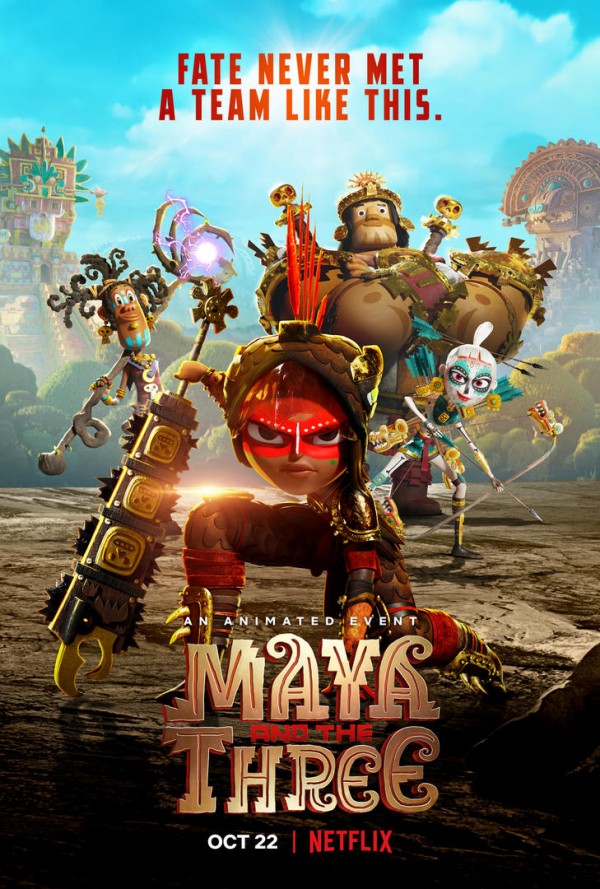 "Maya and the Three" is a nine-chaptered Netflix Animated Event that follows the story of Maya, a warrior princess from a fictional fantasy world. It is inspired by the "rich, vibrant mixture of Aztec, Maya, and Inca mythology, and modern-day Caribbean culture," according to the "Maya and the Three" press release.

About to celebrate her birthday and coronation, the princess soon finds herself face-to-face with the gods of the underworld, who inform her that her life is forfeited to the God of War because of her family's secret past.

Should Maya refuse, the whole world will suffer the consequences? Maya must embark on an adventure to fulfill an ancient prophecy involving three great warriors' coming to save her life, her family, and even the whole world.

Zoe Saldana, known for roles in "Guardians of the Galaxy" and James Cameron's "Avatar," stars as the rebellious Princess Maya. Jorge R. Gutiérrez is the director, creator, and executive producer of "Maya and the Three."

Other cast members of "Maya and the Three" include Gabriel Iglesias as Picchu, Allen Maldonado as Rico, Stephanie Beatriz as Chimi, Diego Luna as Zatz, and Gael García Bernal as The Jaguar Triplets.

Rounding up the cast members are Jorge R. Gutiérrez as King Teca, Sandra Equihua as Queen Teca, Isabela Merced as the Widow Queen, Chelsea Rendon as the Goddess of Tattoos, Joaquín Cosío as the God of Bats, Carlos Alazraqui as the God of Dark Magic, Eric Bauza as the God of Jungle Animals and Rita Moreno as Ah Puch.

Silvia Olivias and Jeff Ranjo serve as co-executive producers, while Tim Yoon is also a producer of "Maya and the Three." Its writers are Jorge R. Gutiérrez, Silvia Olivas, Doug Langdale, and Candie Kelty Langdale.

The music of "Maya and the Three" is by GRAMMY nominee Tim Davies while its original themes are by Oscar and GRAMMY winner Gustavo Santaolalla.

The official trailer of "Maya and the Three" is now up on YouTube. It features the song "If It's to Be," written by Gustavo Santaolalla and performed by Kali Uchis.

"If It's to Be" will be released by Interscope on October 13. "Maya and the Three's" cinematic score will be made available by Milan Records on the same day of the limited series' premier.

Avatar: Frontiers of Pandora Will Have a New Story: Everything We Know About It So far