William Shatner has finally boarded the giant Blue Origin New Shepard 18 or NS-18. Based on the interviews that were conducted before their spaceflight, the whole crew seems to be more than just prepared. 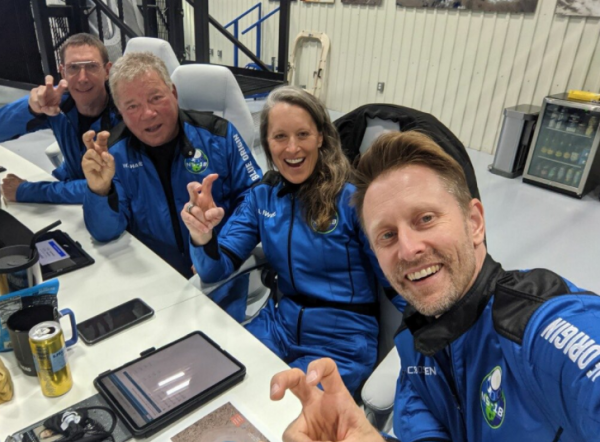 Here are the exact non-astronaut individuals currently on board:

On the live streams, the capsule and the booster smoothly separated from each other without any issue, showing that the flight was going well.

The booster of the NS-18 for Blue Origin's second spaceflight successfully returned back to Earth. On the other hand, the capsule, which contains the non-astronaut passengers, also parachuted back to the planet.

The live stream videos provided by NBC News and other giant news agencies showed that the astronauts made a clean touch down in the desert. The total time length of the spaceflight lasted more than nine minutes.

So, I already wrote in my nearly completed book manuscript that Blue Origin a successful second human-carrying flight. Here's to hoping I predicted the future accurately.

On the other hand, the passengers experienced weightlessness for around three minutes. They were also able to reach around 100,000 kilometers above the Earth's surface.

Blue Origin's Cornell, 18 minutes into the T-15 hold, says the "weather looks good" but that the company is "continuing to make sure that the rest of our teams are aligned." No specific cause for the hold given.

Because of this massive space activity, William Shatner is now the oldest individual to reach outer space.

I do not know what I may appear to the world, but to myself I seem to have been only like a boy playing on the seashore, diverting myself in now & then finding a smoother pebble or a prettier shell than ordinary, whilst the great ocean of truth lay all undiscovered before me.🚀 pic.twitter.com/ZY2Ka8ij7z

"I do not know what I may appear to the world, but to myself I seem to have been only like a boy playing on the seashore, diverting myself in now & then finding a smoother pebble or a prettier shell than ordinary," said the popular "Star Trek" actor via his latest official tweet, which was posted around 5 minutes after he went to space.

On the other hand, Bezos was seen greeting his passengers and welcoming them back. The popular actor and the billionaire even hugged each other to show their appreciation and excitement.

The exciting flight of Shatner and other space activities made by Blue Origin and SpaceX just shows that space tourism is now being treated more seriously than before.

For more news updates about other space launches from Blue Origin, always keep your tabs open here at TechTimes.