William Shatner's Blue Origin spaceflight is currently delayed because of bad weather conditions. However, the "Star Trek" actor would only have to wait for a day before he can finally visit outer space. 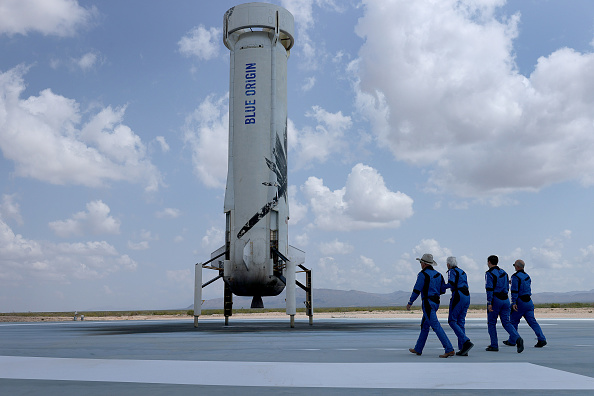 (Photo : Photo by Joe Raedle/Getty Images)
Blue Origin’s New Shepard crew (L-R) Jeff Bezos, Wally Funk, Oliver Daemen, and Mark Bezos walk near the booster to pose for a picture after flying into space in the Blue Origin New Shepard rocket on July 20, 2021 in Van Horn, Texas. Mr. Bezos and the crew were the first human spaceflight for the company.

"Due to forecasted winds in West Texas we are pushing #NS18 launch target to Wednesday, October 13," said Jeff Bezos' space agency via its official Twitter account.

Blue Origin added that the new schedule for Shatner's liftoff is exactly 1:30 p.m. UTC or 8:30 a.m. CDT. On the other hand, the independent space company said it would start live broadcasting the launch at T-90 minutes.

The giant agency added that interested viewers could see the launch via its official website. More details will also be released as the spaceflight's date nears.

According to ABC 11's latest report, the delayed spaceflight of New Shepard NS-18 is caused by forecasted winds at Blue Origin's West Texas launch site. The original launch date is on Tuesday, Oct. 12 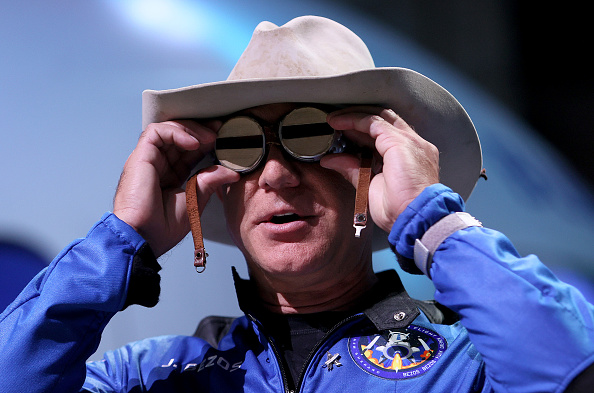 (Photo : Photo by Joe Raedle/Getty Images)
VAN HORN, TEXAS - JULY 20: Jeff Bezos holds the aviation glasses that belonged to Amelia Earhart as he speaks during a press conference about his flight on Blue Origin’s New Shepard into space on July 20, 2021 in Van Horn, Texas. Mr. Bezos said he brought the glasses with him on the flight. Mr. Bezos and the crew that flew with him were the first human spaceflight for the company.

Also Read: Artificial Gravity: Will It Ever Be Possible? Here's The Science And Tech Behind It

Because of this issue, many individuals are now making fun of Blue Origin. In the comment section of the company's latest Twitter post, one of the commentators said that he was surprised that Jeff Bezos did not mention the involved astronauts.

On the other hand, one of the Twitter users attacked the actual statement of Blue Origin, saying that it should use "forecast" since it is the most common term.

Meanwhile, another commentator shared an NSFW joke. He explained that the space company should enhance its "little" rocket and make it faster, longer, and harder. Based on his statement, it seems like he is comparing Bezos' spacecraft to a male private part.

I figured your little rocket would get stiffer with a good blow. HARDER LONGER FASTER STRONGER!https://t.co/ICJTrK5Gwp

This is not the first time that Blue Origin has faced this kind of criticism. Various people across the globe already made fun of the giant space agency, especially during the peak of its fight against Elon Musk and SpaceX.

Why Shatner's Spaceflight Is Different from the Rest

Business Insider reported that the Hollywood actor's upcoming spaceflight would not involve any employee of Blue Origin, making it quite different from the other launches.

On the other hand, he would also be the oldest person to reach outer space. This means that the 90-years old actor would break the record of Wally Funk, the first passenger to fly with Bezos.

For more news updates about Blue Origin and its upcoming spaceflights, always keep your tabs open here at TechTimes.

Related Article: 'Star Trek's' William Shatner Will be the Oldest Person to Fly to Space: How to Watch