Team Secret makes another 2-0 game series after winning against IG, allowing them to stay in the upper bracket. In the first game, Nisha's Templar Assassin made a magnificent KDA with no deaths.

On the second match against Invictus, Team Secret took advantage of the ganks made by the enemy team, creating massive counters, thanks to Matumbaman's Life Stealer.

Naix even got an Aegis after they took more than two enemy players, forcing IG to use their gold to purchase buybacks. Although Invictus Gaming tried to prevent them from taking Roshan, Puppey and the rest of the crew still managed to turn the tides against IG.

After that, they used Naix's Aegis to have an advantage against IG, allowing Team Secret to wipe out Invictus Gaming and taking the second game in their best-of-three series.

"Dota 2" TI10 is now being dominated by Team Secret. Recently, the professional esports team was able to get a flawless victory against OG, putting the popular group in the lower bracket.

Now, their match against IG (Invictus Gaming) was like a deja vu from the previous game against Ceb and his teammates.

Just like before, Puppey and other members of Team Secret showed that they really have more strategies up their sleeves, which the team captain confirmed in his after-game interview.

"One down, one to go," said the winning group.

Based on this statement, it seems like Team Secret is pretty confident with their synergy since they still have two more games against IG.

However, if they can still beat Invictus Gaming in the next round, then they would move on to the next competitor.

Team Secret ended the game with a score of 35-13, in favor of their group. On the other hand, here are the picks of each team: 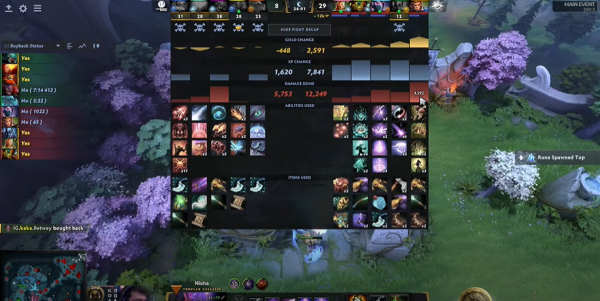 In the first part of the match, Team Secret was able to get first blood in the top lane. After that, they decided to work more on their synergy, ganking different lanes and getting those easy kills.

It looks like @teamsecret has their eye on the prize as they take a commanding lead in Game 1 of their series against @invgaming. Stay tuned for Game 2 of this important Upper Bracket series, kicking off soon! #TI10 pic.twitter.com/QUaUHYeL0l

Nisha showed an amazing performance with his Templar Assassin, which allowed him to have 14 kills and no death.

On the other hand, Yapzor's Elder Titan also played an important role since he is the stunning IG members caught alone in certain parts of the map.

But, the announcers of the match noticed that Zai (Vengeful Spirit) is also making great use of his ultimate, swapping enemy champions to provide get counter plays.

yeah perkz ditches his team and split pushes all game with his 11 mil, this is clearly a metaphor by C9 to highlight the large disparity between the upper and lower class in modern society. You gotta respect the org for sending such a powerful message on the worlds stage

On the other hand, Matumbaman also made huge efforts using his Monkey King to secure run-away Invictus Gaming, preventing them from escaping to their bases. Based on their performance, Team Secret is really a "Dota 2" team that they need to take seriously during The International 10 Main Event.

With Team Secret's great performance in "Dota 2" TI10 Day 3, Puppey and his members are really showing experts' predictions to be unreal.

Recently, Dot Esports reported that some critics claimed that IG's efficient offense would make it difficult for Team Secret to win. But, with the standing of 35-13, it seems like this is not the case.

For more news updates about Team Secret and its upcoming matches in the ongoing "Dota 2" The International 10, always keep your tabs open here at TechTimes.

ⓒ 2021 TECHTIMES.com All rights reserved. Do not reproduce without permission.
Tags: Dota 2 Dota 2 TI10 Dota 2 The International 10 Update
Most Popular