"Dota 2" T10 Main Event has been a surprising event since it began on Oct. 12. One of the most amazing matches that happened was between OG and Team Secret. 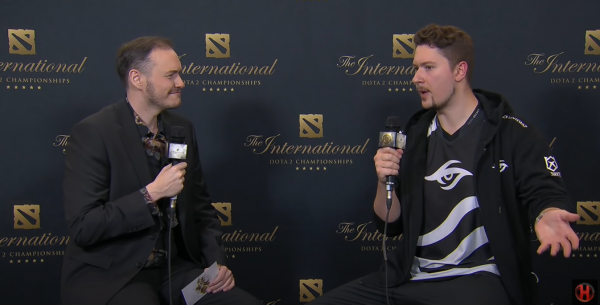 Congrats on your first win in the upper bracket in your whole history. Only after 7 years after team secret was founded you finally managed to do this 🤣🤣 you guys must be so proud of yourselves 🤣

For the past few years, OG has been in the upper bracket in each The International tournaments. However, the professional esports group has faced various issues, such as the latest medical condition of Sebastien "Ceb" Debs, which forced him to have eye surgery.

Secret was lead by Nisha, who decided to use Ember Spirit, allowing him to have a KDA standing of 20/3/22.

According to UpComer's latest report, Puppey shared that they are saving more efficient strategies from him and his teammates. As of the moment, what he is saying is true since they are now 2-0 in the ongoing "Dota 2" The International 10 Main Event.

After their victory, Puppey had an interview with one of the game's hosts. Clement Ivanov, the current captain of Team Secret, was interviewed by Jake Kanter, asking him questions about the game.

The interviewer added that this is the first time that Secret has entered The International without being the "Dota 2" community's favorite. This is one many viewers were shocked that their favorite OG lost against Puppey and his teammates.

Yesterday's victory left a sweet taste but this was never our main goal. We're here for more.

Back at it tomorrow. See you gang 🖤#SecretDota #TI10 pic.twitter.com/XaaCEM0qDq

Based on Puppey's statements, it seems like he is now considering the current TI10 as a major tournament, claiming that in "Dota 2," there are actually no tournaments.

He added that there's no reason to overdo anything. Aside from this, Puppey also explained that they already got what they wanted in the first "Dota 2" Majors.

Aside from saying that they still have hidden strategies, The captain of Team Secret also made a statement for OG. This all started when Siractionslacks asked him about his advice for the teams in the lower bracket.

Puppey said that "Dota 2" teams should have the same mindset when they are in the lower and upper brackets, adding that your standing should not get into you since it would affect your gameplay.

After that, the interviewer asked him specifically about OG. This part went viral since the Team Secret player said that OG should stay down when they are in the lower bracket, as reported by SportsRush. On the other hand, Team Secret would be facing Invictus Gaming as their next competitor.

For more news updates about Team Secret and other competing teams in "Dota 2" TI10, always keep your tabs open here at TechTimes.