"Microsoft Flight Simulator" is coming in a Game Of The Year (GOTY) package, and it's got a lot of freebies coming the players' way. 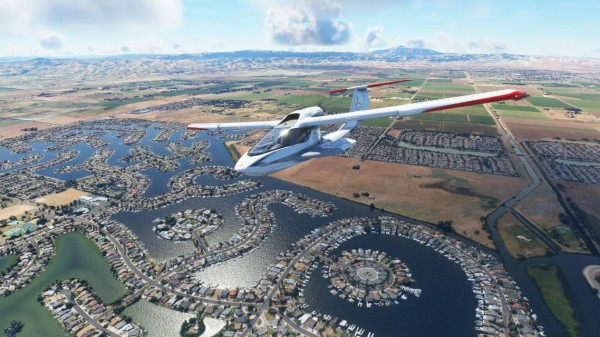 Microsoft also recently announced that the GOTY edition for "Microsoft Flight Simulator," slated to come on November 18, will be free for all players who currently own the game on supported platforms.

Here is the official announcement trailer:

The additions to "Microsoft Flight Simulator" are actually part of an entirely different announcement: an official Windows 11 collaboration, reports SlashGear. As such, some of the new content in-game will be referring to this.

A total of 11 landmarks around the game world, for instance, will allegedly be lit up in "Windows Blue" to celebrate the team-up. While developer Asobo Studios didn't exactly reveal which landmarks these are, one can assume that they're going to be very recognizable.

The eight fully handcrafted airports, as per the original SlashGear report, will be in the United States, Germany, and Switzerland.

As per the aircraft, "Microsoft Flight Simulator" will be getting its first-ever military plane in the F/A-18 Super Hornet fighter jet. The Pilatus PC-6 Porter, Aviat Pitts Special S1S, VoloCity, and the CubCrafters NX Cub round up the list of the new aircraft.

When "Microsoft Flight Simulator 2020" was first announced, a lot of people likely never expected the game to become popular the way it did. And that could partly be due to how technically impressive it is.

With the right, powerful hardware (especially on PC), "Microsoft Flight Simulator" can be downright photorealistic--if not extremely punishing on the system.

A YouTuber by the name Max737Ifly posted a video of the game running on the top-of-the-line NVIDIA RTX 3090 in max settings at 4K, and you could swear that it was a video of an actual plane in flight:

It looked so good that even NVIDIA tweeted about it:

Another testament to how technically impressive "Flight Simulator" 2020 is how it literally rendered the entire world in an interactive 3D setting.

Developer Asobo Studios managed to achieve the feat by using a mix of machine-learning technology and traditional game development techniques, as reported by the BBC.

To fill out most of the map for "Flight Simulator 2020," the devs relied on a machine learning algorithm to create the details, after training it on tons of actual satellite photos of the Earth.

In other words, much of the photorealistic detail you can see in the game was created by a machine. The only ones which were handcrafted are the airports dotting the entire map, as well as 341 major cities that were photo-realistically modeled and rendered.

"Microsoft Flight Simulator" was, by all means, a technical marvel of a game.

Related Article: 'Microsoft Flight Simulator 2020' Can Be Played on the Series X/S At Half its Download Size

'Microsoft Flight Simulator': How a Game Rendered the WHOLE WORLD

Microsoft Flight Simulator 2020 Hack: How to Go Anywhere You Want