A romance scam that preyed on victims in online dating sites has resulted in the arrest of eight Nigerian men. The eight men have already been charged in a South African court after their arrest in the country.

Their arrest follows an international operation that involved the Federal Bureau of Investigation (FBI) and Interpol. Most of the alleged victims of the romance scam live in the United States.

It has been alleged that the eight arrested men are members of a crime syndicate called Black Axe.

A romance scam that took place on online dating sites has resulted in the arrest of eight Nigerian men in South Africa. The eight men have already been charged in a South African court, according to a report by BBC.

Per the BBC report, the eight men "are accused of defrauding more than 100 victims of almost $7m (£5m) in total over the past decade."

The international operation that led to the arrest of the eight men involved the FBI and Interpol. The BBC report says that "It is believed the FBI and US Secret Service led the investigation and worked with South African authorities, including the elite police unit, the Hawks."

Most of the alleged victims of the romance scam are in the United States. The U.S. has already applied for the extradition of the eight men, who are wanted in Texas and New Jersey. The eight men are wanted for money laundering and conspiracy to commit wire and mail fraud, among others.

The US Attorney's Office in New Jersey has released the names and ages of the suspects in their press release.

It is being said that the eight men are members of a crime syndicate called Black Axe, which is said to originate in Nigeria. Black Axe allegedly specializes in money laundering crimes.

How the Romance Scam Took Place

Per the BBC report, the men used false identities to victimize women on online dating sites. The women are usually widows or divorcees that are fooled by the men into thinking they were in genuine serious relationships.

The suspects are then accused of coming up with stories that allow them to take money from their victims.

"The fraudsters intimidated and berated their victims, ruined their lives and then disappeared," according to police spokeswoman Col. Katlego Mogale, who was quoted in the BBC report. 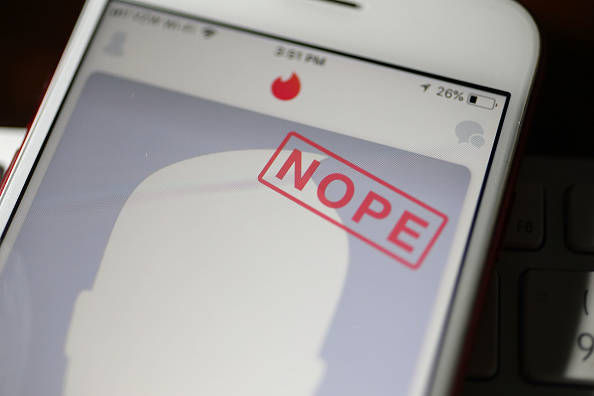 (Photo : Photo illustration by Joe Raedle/Getty Images)
In this photo illustration, the dating app Tinder is seen on the screen of an iPhone on August 14, 2018 in Miami, Florida. The co-founders of Tinder and eight other former and current executives of the dating app are suing the service's current owners for at least $2 billion.

Romance scams and even hacking attempts are nothing new, especially when it comes to online dating sites.

In 2016, hackers were able to leak the personal information of 1.1 million people who are on an American dating site called Beautiful People.

It has also been recently reported here on Tech Times that scammers are now combining cryptocurrency with romance scams in order to victimize people in the United States and in the U.K.

FBI Says Online Dating App Scams Now Results in More Than $133 Million Losses! How To Identify, Avoid, and Report Them