Intel Arc Alchemist might already be finished according to the latest leak. Judging from the recently leaked photos on YouTube, it will feature several variants for the "DG2" type cards.

The upcoming GPU is set to be released in the first quarter of 2022.

Popular tech tipster Moore's Law is Dead has unveiled some interesting information about this hardware. Here are some details about Intel's new GPU brand. 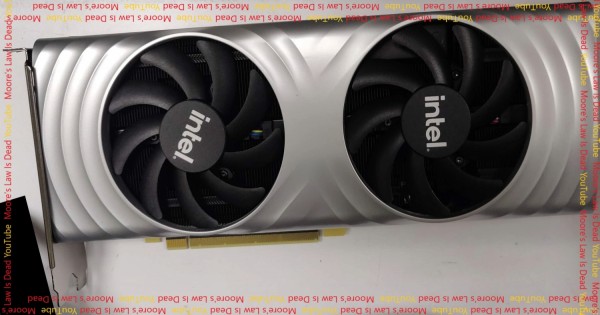 (Photo : Moore's Law is Dead )
Intel's upcoming flagship is recently leaked to have a specified set of features. Here's how the Arc Alchemist GPU looks like according to the leak.

Videocardz discovered via Moore's Law is Dead that the Intel Arc Alchemist GPU is drawing closer to its release date following the leaked photos on YouTube.

Before disclosing the features of the newly-leaked graphics card, the famous YouTuber has exposed the early look of the Intel Xe-HPG which shows its reference design.

The flagship GPU under the Arc branding is potentially now in the pre-production stage, as the report stated.

Furthermore, the global chip processing company could be looking forward to rivaling other competitors such as NVIDIA and AMD Radeon. In addition, the Arc Alchemist graphics card is set to become the first GPU based on Intel's current roadmap.

For further testing, Intel has quite invested in the Intel DG1. However, the company found out that it was mediocre due to a low-power graphics architecture in Xe LP. As a matter of fact, customers can't purchase even one of them.

To amplify the user's gaming experience, Intel's XE HPG roadmap suggested that the Arc Alchemist GPU could be related to the NVIDIA RTX 3070. Both of them share features such as 16 GB GDDR6 memory and 512 execution units (EUs).

According to the latest leak, the upcoming flagship card is set to have many "DG2" GPU variants that are now in the early stage of development. These variants include 128EUS for entry-level cards, as well as 448EUs, 384EUs, and 256EUs.

The leaked photo also showed that it would arrive with two fans, according to a report by The Verge on Friday, Oct.29.

Last month, Tech Times reported that Intel was making a significant move to launch another flagship card under the "Alchemist" branding. The processor manufacturer, at that time, said that its new GPU can compete with AMD RX 6700XT and NVIDIA RTX 3070.

According to the early rumors about this computer hardware, its initial price for Alchemist GPU could sit between $100 and $500. The previous details came from a Chinese language site, Baidu Forums.

Before Intel finally unveiled its latest 12th gen core, a lucky customer has successfully got one before its official release. A Reddit user shared some photos of the newest Core i9 chip.

According to the buyer, the cost of the Core i9-12900K is cheaper than its usual price. The customer obtained two of them which cost $610 apiece.

At that time, the customer was not able to share its specs since there's no note about them in the packaging.