Ford's F-150 Lightning electric truck reservation holders are composed of some Tesla owners seeking to replace their current electric vehicles by at least 11 percent. However, the rest of them have already owned EVs in the past. 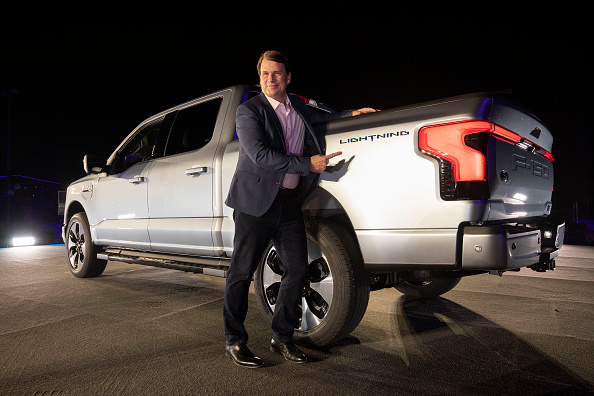 (Photo : by Bill Pugliano/Getty Images)
DEARBORN, MI - MAY 19: Jim Farley, CEO of Ford Motor Company, poses with the new all-electric F-150 Lightning performance truck at its reveal at Ford World Headquarters on May 19, 2021 in Dearborn, Michigan. The truck will be built at the all-new Ford Rouge Electric Vehicle Center in Dearborn starting in the Spring of 2022.

The new EV truck from Ford is turning heads as it is the electric version of its sought-after pickup, which has become its best-selling truck of all time, according to the news story of Interesting Engineering.

Meanwhile, the latest profile information from the reservation holders of the electric pickup truck of the American automaker, Ford, comes from a recent survey by 'The Lightning Owners' forum, as per the report by Electrek.

More than 400 reservation holders of the F-150 Lightning EV participated in the said survey, which gives people an overview of the people who have decided to get the electric pickup offering of Ford. ​

The survey of Ford F-150 reservation holders showed that most of them are already EV owners, while one person in the survey decided to replace a 1972 Ford F100.

To be precise, about 40% of the participants of the survey said that they once had an EV previously.

On the other hand, about 11% of the reservation holders claimed that they are replacing their current Tesla EV in favor of the upcoming electric pickup from Ford.

On top of that, around 25% of the folks who got a reservation for the F-150 Lightning are seeking to replace their ICE-powered version of the vehicle with its all-electric counterpart.

Aside from being a mere electrified version of the F-150 Lightning, Ford has gone the extra mile to prove that it could offer more to EV owners.

In fact, the electric truck of the American automaker boasts the largest "frunk" that ever saw the light of day with over 14 cubic feet of storage.

While previously car owners were used to a more traditional storage provision on their vehicles called a trunk.

EVs have changed the trend by locating their trunks on the front part of the car. Thus, the term is coined as "frunk."

However, it is to note that ultra-fast supercars made by the likes of McLaren and Ferrari have also previously sported the same placement of the trunk.

Still, Tesla EVs widely included it in all of their vehicles from sedans to SUVs. This time around, as Ford is also entering the electric car market, its 2022 F-150 Lightning will also carry a frunk.