NASA says the International Space Station or the ISS is still at high risk from the falling debris coming from the Russian missile test that destroyed an old satellite. 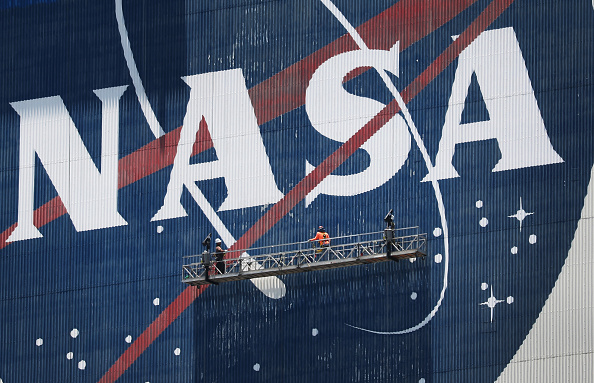 (Photo : by Joe Raedle/Getty Images)
CAPE CANAVERAL, FLORIDA - MAY 20: Workers freshen up the paint on the NASA logo on the Vehicle Assembly Building before the arrival of NASA astronauts Bob Behnken and Doug Hurley at the Kennedy Space Center on May 20, 2020 in Cape Canaveral, Florida. The astronauts are scheduled to arrive today for the May 27th flight of SpaceX’s Crew Dragon spacecraft. They will be the first people since the end of the Space Shuttle program in 2011 to be launched into space from the United States.

NASA or the National Aeronautics and Space Administration announced on Thursday, Nov. 18, that the risk brought upon by the Russian weapons that blew up a satellite above the Space Station remains a threat, as per the report by Daily Press.

However, the United States space agency previously noted that the highest risk for those who are residing inside the space station was in the first 24 hours since the missile attack.

It is worth noting that both astronauts from both the US and Germany are currently residing inside the ISS.

During the highest threat period, the hatches between the compartments of the space station have been closed by the residents as part of their precautions.

On Oct. 17, it reopened as the risk from the falling debris had gone down. However, NASA still warns on Thursday that the ISS is still at high risk.

That said, the US Space Station announced that its upcoming spacewalk, as well as other operations in the ISS, is now being reviewed for any risks before it proceeds, according to the news story of The Hill.

NASA further revealed that the astronauts staying in the space station were supposed to conduct a spacewalk on Nov. 30. It attempts to fix a broken antenna in the ISS.

On top of that, the spacewalk will also inspect any further potenti

al damage in the space station brought upon by falling debris from the Russian missile test.

However, with the risk still being high in the ISS, an initial review of the spacewalk will have to be undergone before proceeding with its schedule.

Last Monday, or on Nov. 15 to be exact, the Russian Ministry of Defense launched its first-ever anti-satellite missile test, as per Space.com.

The missile test from Russia blew up one of its aging satellites just above the International Space Station, which ended up creating a cloud of space debris, alarming those who are residing in the ISS.

NASA and the US government went on to condemn the latest move of the Russian nation, noting that it not only put the ISS at risk but could also potentially affect the space station of China.