Apple Watch has become a popular pick for smart wearable enthusiasts this year, but before that, there was a standout product that was released in 1998. The Seiko WristMac, which was believed to be a predecessor of Cupertino's smartwatch, will be coming to an auction earlier this week. 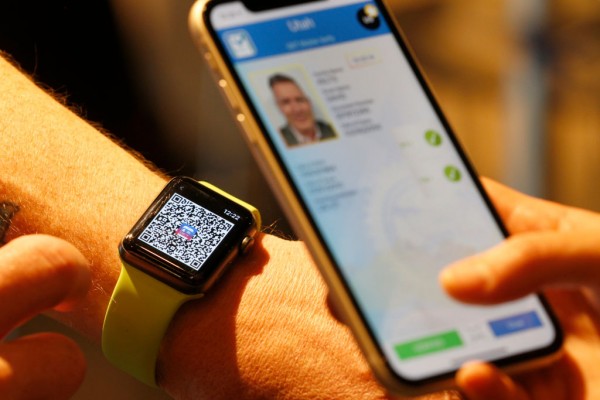 (Photo : George Frey/Getty Images from Unsplash)
SALT LAKE, UT - AUGUST 04: A person scans a QR code on an Apple Watch to temporarily send their digital driver's license to another mobile phone at a Harmons Grocery store on August 4, 2021 in Salt Lake City, Utah. Utah is the first state in the nation to start to convert and offer digital driver licenses on mobile devices.

According to a report by Apple Insider, the Seiko WrisMac smartwatch will be available for auction soon. The 1998 timepiece still preserves its original packaging. The tech site mentioned that its price could go from $25,000 to $50,000 during the auction.

Before Apple Watch became a thing for the collectors, it took 26 years for the Cupertino giant to release it. The classic wearable relies on AppleTalk which allows seamless connection of the user to Macintosh. In addition, it could also keep your contacts with ease.

Furthermore, the WristMac has alarms that you can set depending on your preference. It could be either for daily or weekly use. There's also a single-time alarm that you can explore.

Apart from that, you can export your notes as a text file to a disk. What's interesting about the Seiko smartwatch was its participation in space exploration. Astronauts used it on August 28, 1991, to send the first email outside the Earth.

By linking it with the AppleLink and Macintosh Portable, the team managed to thrive in space by using it to sound an alarm. It has become beneficial to the explorers especially when setting up reminders for a specific task.

Related Article:  Original Apple Watch For Sale On EBay And It's More Expensive Than The New Smartwatch

Someone Purchased Seiko WristMac For Less Than $50

In another report by Phone Arena, an unknown buyer bought the Seiko WristMac for only less than $50 from the ComicConnect auction. The never-before-worn watch came from a Connecticut Mac warehouse that decided to close at that time.

According to the source, the unopened Seiko WristMac watch under the Serial no. 702016 has a lot of freebies for the lucky buyer. These include the mint box, reference manual, original packaging, registration card, and the floppy disk for AppleTalk.

ComicConnect website noted that the Apple Watch predecessor was a rare tech piece especially for Apple enthusiasts, collectors, and more.

ComicConnect co-founder Stephen Fishler said that the Seiko WristMac was a "can't miss piece" of computer history. He added that since this smartwatch is so hard to find, no one could predict its selling price.

The online auction for the Seiko WristMac watch will kick off on Monday, Nov.22. The starting bid would start at $1 so don't forget to pay attention to the surge of its price anytime.

In February 2013, the first Apple smartwatch was believed to be featuring the iOS platform. At that time, speculations pointed out that it could feature Corning's Willow Glass which would let it bend without getting broken.

Around that year, several reports about the potential Apple watch have indicated the participation of Siri in the send-and-receive messaging feature.

Elsewhere, the signed Apple II Manual from the late Steve Jobs was sold at a whopping price of $787,484 in an auction in August. Recently, there was another bidding event that took place on eBay. A modded iPhone X with USB-C port reached a bidding price of $85,000.