‘Fortnite’: What are Flare Guns and How Do You Find Them in the Battle Royale?

"Fortnite" features a new weapon on the Battle Royale, and it is not something that brings a "ratatat" kind of firing action, as this one is a "go big or go home" type of equipment. Unlike other games, "Fortnite's" Flare Gun is used for causing mayhem and protecting one's self, being the handiest during the final moments of the game.

'Fortnite' Flare Gun: What is It and How Does it Work? 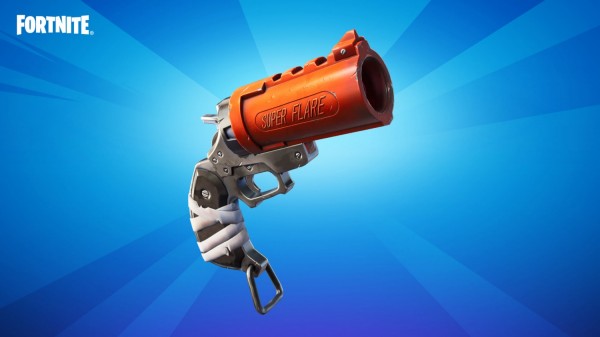 The news is out, and alongside the Batte Royale Hotfix version 19.01 is the arrival of the Flare Gun in "Fortnite."

The new game mode invites players to discover a new weapon, and it is the popular sidearm that is mostly used for a stranded person in the middle of the ocean or most remote places. Flares may help light up the skies in harmless ways, but in "Fortnite," it is to cause mayhem and get the best out of one's opponents.

The Flare Gun gives off two functions, making it a two-in-one weapon. First is, when shot to the ground, it brings an intense fire that lasts like a Molotov Cocktail; Second, when shot towards the sky, the flare gun will ping and reveal the locations of enemy forces still alive in the match.

'Fortnite' Flare Gun: Where to Find It?

There are no exact locations for the Flare Gun to appear on the map, unlike the exotic or mythic weapons' spawn locations already known to the gamers. However, the Flare Gun can be found in chests, on the ground, or Supply Drops says "Fortnite."

The ground location of Flare Guns is best seen in places densely populated with loot, meaning that it would mostly be seen in places where people come often. However, take this note with a grain of salt as there are no accurate places for a flare's spawn.

"Fortnite" has a good start this 2022, among other games, as it remains as one of the top online games in the industry now, featuring a lot of new additions to its content. Right before the year ended, "Fortnite" took out Chapter 2 and started with Chapter 3, a new phase of the battle royale with new maps, modes, and characters to offer.

This 2022, numerous additions to the game came for gamers to enjoy and access, including that of Netflix's "Cobra Kai," Boba Fett, and Marvel's Spider-Man (and his many add-ons). New weather also plagues the famous game with tornadoes and twisters that shake things up, offering a new challenge for gamers, alongside surviving the enemies' onslaught.

Epic Games truly outdid itself for "Fortnite's" 2022 start, and it shows that with the flare gun that gamers are now enjoying and getting the hang of in-game. However, the deal now remains unknown if the weapon is staying for a long time or will it be a limited release from the developers, just for the first moments of Chapter 3.

Related Article: A 'Fortnite' iOS Comeback May Have Just Occurred Via A Loophole