Once again, the viral "iPhone shower" meme resurfaced in 2022 a year after trending among smartphone fans. It was brought to the spotlight by Japanese voice actress (VA) Moeka Koizumi, who mistakenly took the device while taking a bath.

Indeed, bringing our smartphones into the shower is a risky idea since we do not know how waterproof they are. What the VA did was just a mistake on her part, but fans knew that it could be a perfect meme for the Apple gadget.

The trend started around February 2021 and since then, people all over Twitter began throwing #iPhoneShower on their posts. 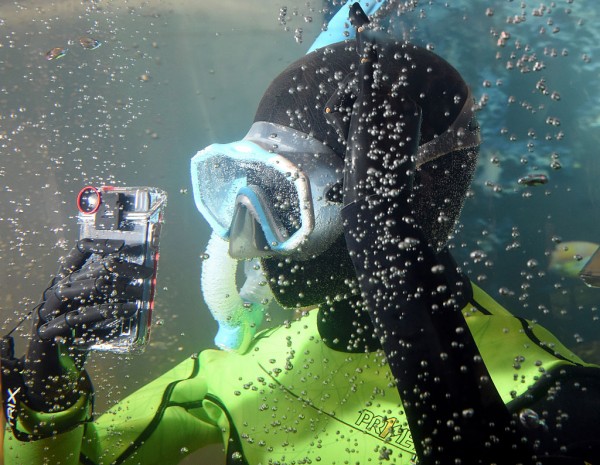 (Photo : Ethan Miller/Getty Images)
Once again, the viral "iPhone shower" trend resurfaced in 2022 after a year of becoming popular among smartphone fans. It was brought to the spotlight by Japanese voice actress (VA) Moeka Koizumi who mistakenly took the device while taking a bath.

Originally, Koizumi (@k_moeka_ ) only wanted to shower her iPhone to clean its camera since the captured images appeared to be blurry. The fans, however, were fast to see that this opportunity could be a meme-worthy moment after all.

According to a report by Apple Insider, the origin of the meme could be traced back to Twitter when the VA's fans started to post their illustrations resembling Koizumi.

In one post, there was a chibi-style girl who was wearing a school uniform. She is sprinkling water onto the iPhone through a handheld shower.

The fans did not see what's coming next. Their previously-made memes were retweeted on the social media platform on Thursday, Jan. 14 for no apparent reason.

In Japan, the iPhone sits at the top 1 spot among the most discussed tech topics. Around the world, it is ranked 13th in popularity.

The same report from Apple Insider indicated that both the iPhone 12 and iPhone 13 line-ups feature IP68 ratings. This means that these devices can be submerged underwater for up to a six-meter depth for 30 minutes.

The case for Koizumi was rather different if we are talking about its waterproof feature. Since the shower spits high-pressure water, the iPhone's water-resistant condition might be bypassed as a result.

Moreover, the article added that steam could enter through iPhone and other smart devices easily. The penetration will be worse if a particular gadget was previously damaged or subjected to unexpected cracks or falls.

What the Japanese voice actress experienced with her her device was all related to the steam damage. Her iPhone's Face ID suddenly stopped functioning and its cameras were affected. They could capture images, but they were all foggy in quality.

If your iPhone has been subjected to a similar incident such as Koizumi, expect that Apple will fix it even if you have an AppleCare plan.

The best advice that you can heed is to never try submerging it in the steamy water. If that happens, your iPhone is already done with its service. You can still enjoy "iPhone shower" memes without damaging your gadget.

Vaccine Memes Are All Over Twitter, Telling You to Refrain from Doing Recreational Activities After Being Vaccinated

Best Memes of 2021 That Will Make You Feel Better