Epic Games' Fortnite will get its Chapter 2, Season 3 in June after some delays of unknown reason, but that doesn't mean the season's Battle Pass will be extended, which means we're now nearing the end with just a week left of regular challenges.

(Photo : Fortnite/Facebook)
This week's challenges are the last ones for this season's Battle Pass.

Midas' Mission Part 2 challenges have officially rolled out, giving players a chance to finally finish their Battle Pass and choose from either the GHOST or SHADOW version of the Midas skin.

Additionally, completing each task will reward players with 40,000 XP, as with previous regular challenges.

Forbes leaked the Midas' Mission Part 2 challenges last week, but if you didn't get the chance to see that, here's the complete list of challenges for Fortnite's Chapter 2, Season 2, Week 10:

As with past challenges, most of these missions are pretty straightforward and can be done by continuously joining matches.

Nevertheless, a couple of tasks in this list can be a little tough without a guide, specifically the locations of the golden pipe wrenches and the sites of the Hayman and the Greasy Graves (The Agency is a marked location on the Fortnite map).

Read Also: Fortnite x Travis Scott Guide: Where to Dance at Apres Ski or The Yacht? Plus Astro Head Locations

Keeping up with the gold theme--since it's Midas, after all--players need to find five golden pipe wrenches that are scattered around the edges of the island, according to GamesRadar.

Here are their locations:

To make it easier, here are the locations on the Fortnite map: 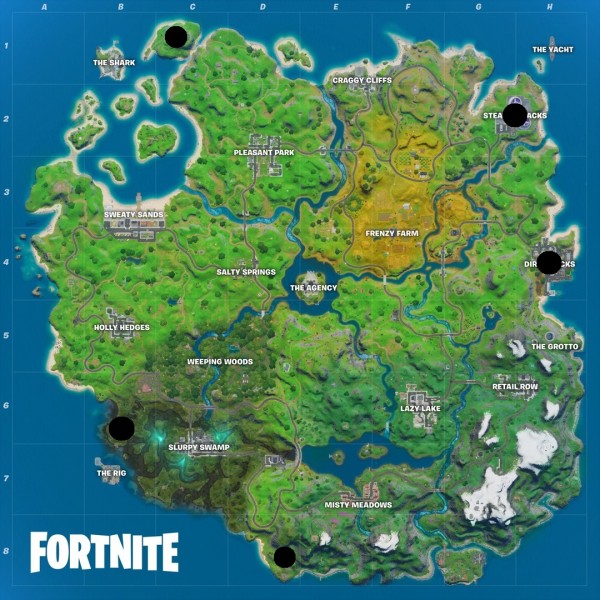 As you can see, they are around the edges of the island, so it will be tough to finish them in a single match, but luckily, you can take your time and complete the task by joining several matches.

The Agency, Hayman, and Greasy Graves

Meanwhile, players need to visit The Agency, Hayman, and the Greasy Graves in a single match.

While The Agency is a marked POI, the Hayman and Greasy Graves are not and can be tough to locate without a guide.

So, here are the locations of all three areas on the Fortnite island, courtesy of Fortnite Insider.

As we all know, The Agency is located at the heart of the map, so we'll skip that.

Next, is the Hayman, aptly named since the location includes a literal hayman. It can be found on the southwestern part of Frenzy Farm.

Lastly, the Greasy Graves is a landmark that is located at the southeastern part of Holly Hedges and northwest of Weeping Woods, where you'll see statues of Durrr Burger and Tomatohead.

Here are the locations on the map: 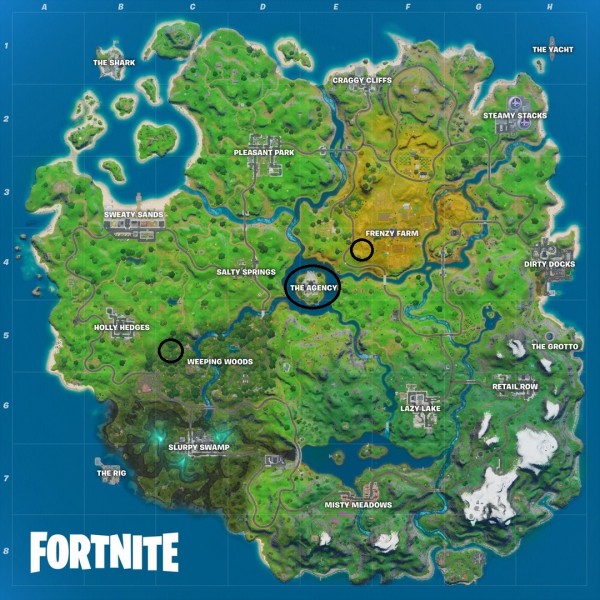 (Photo : Fortnite/Facebook)
Locations of The Agency, Hayman, and Greasy Graves.