[VIRAL] Do You Miss The Goonies? Watch The Cast Reunite For An Epic Virtual Hangout! See Sean Astin, Jeff Cohen, and more!

Do you miss the original cast members of "The Goonies"? You can now watch their epic virtual hangout which was made possible by their number one fan, Josh Gad, who is also the star of "Frozen."

According to ENews' latest report, the original cast of the classic '80s film, "The Goonies," were rounded up by Gad for an iconic virtual hangout on Monday, April 27. 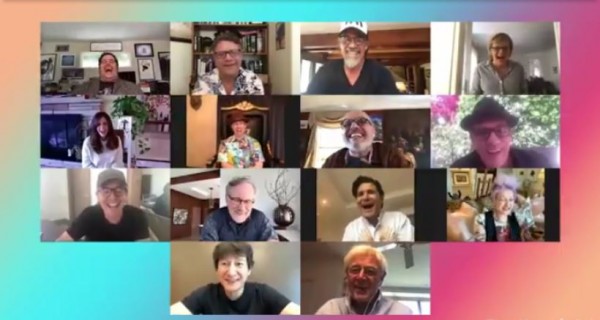 (Photo : Screenshot from Twitter post of @Bttlstrboomer08)
The Goonies Cast Will Be Having An Epic Virtual Hangout Made Possible By Josh Gad; Sean Astin, Jeff Cohen, And Many More Will Be Joining!

"Today, I am going on my own treasure hunt to reunite the cast of The Godfather of its generation: The Goonies," said Josh Gad at the start of the first episode of his new YouTube series called "Reunited Apart," before he introduced Astin, the actor who played "Mikey."

"All right, how do we do this? Do you guys, like, Zoom? Or do you send out, like, a Goonies bat signal up to the sky?" Gad asked Astine before the rest of the cast members made an appearance on the virtual hangout.

However, instead of sending a bat signal, Astin did something even better that will surely bring back memories to the fans of the nostalgic movie. Astin reenacted Mikey's famous "Troy's Bucket" monologue from the movie.

"Sky? Don't you realize? The next time you see the sky, it'll be in another town. The next time you take a test, it'll be in some other school. Our parents, they want the best of stuff for us, but right now, they gotta do what's right for them because it's their time-their time-up there. Down here it's our time-it's our time down here! That's all over the minute we ride up Troy's bucket." recited Astin, who is also the actor in the Netflix series "Stranger Things." The virtual hangout will surely excite long-time fans of the 1985 film.

Also Read: Alien: Isolation Sells for only $150 on Steam until Tuesday for Alien Day

The Goonies cast will be having an epic virtual hangout made possible by Josh Gad; Sean Astin, Jeff Cohen, and many more will be joining!

According to ENews, the original cast members of the movie quickly dropped into the epic virtual hangout and updated each other on what they've been doing since the film was released 35 years ago.

They also shared their experience during the lockdown caused by the COVID-19 outbreak. Josh Gad welcomed even more Goonies alumni after catching up with the main cast. Other Goonies cast members also recited their most iconic lines.

Gad asked the members if they can reprise their roles from "The Goonies" before introducing Donner into the mix.

Aside from bringing the fans an experience of happiness and major nostalgia, the quarantined-inspired YouTube series also seeks to support the Center for Disaster Philantropy's efforts to help people affected by the ongoing COVID-19 pandemic.

Also Read: Is Extraction's Tyler Rake Alive for a Sequel? Plus, Here's How They Managed To Do That Insane 12-Minute One-Shot Action Sequence

Best Memes of 2021 That Made Our Year