Is Motorola Edge Plus Enough to Go Against Apple and Samsung Smartphones?

Motorola's $1,000 Edge Plus smartphone is good but, is it good enough to go against Apple, Samsung, or OnePlus phones?

The main things that are going great for this device are the powerful specs, especially when it comes to the camera. Aside from that, the Motorola Edge Plus goes on sale on May 14. 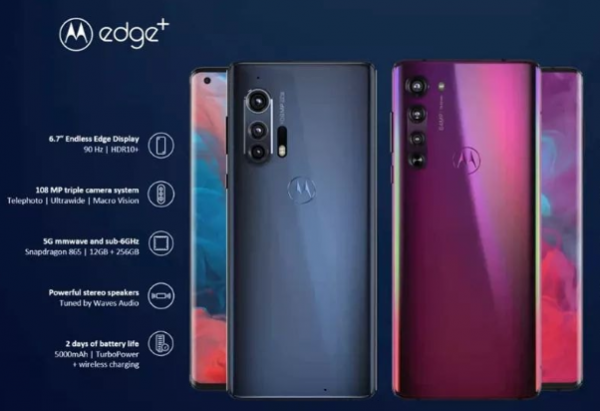 Everybody now knows that Motorola is back and they are making high-end smartphones. This particular category is in need of some competition as it is primarily populated by only two companies: Apple and Samsung.  The only company that was even trying to compete in the United States was LG, but sadly, it has now lost all its appeal.

That's where Motorola with its $1,000 Edge Plus smartphone comes in as the public is hopeful that it would become a viable competitor. Hopefully, the company can develop and create a smartphone that will make Apple and Samsung quake even just a little bit. Is Motorola's Edge Plus the key? Most would think not.

According to Business Insider, "The Moto Edge Plus is a nice phone, but it's lacking the final polish that's expected on high-end flagships, like the OnePlus 8 series or the Galaxy S20 phones. It's only really noticeable when you're inspecting the phone, but none of the pieces (glass front panel, frame, back glass panel) look like they fit with each other very well, and the glossy metal frame looks cheap. "

What really makes this screen standout is the 90-degree curved edges which are very steep, giving off a very nice waterfall effect that really looks great on a smartphone. However, with curved screen edges, there are a lot of negative sides to the phone.

The Moto Edge Plus has a 1080p resolution with a 90Hz refresh rate which of course, says nothing when compared to the 1440p and 120Hz screens of Samsung and OnePlus. But yes, 1080p and 90Hz still look smooth and sharp.

It also has a 5,000mAh battery life which is meant to be the smartphone's main attraction. However, You still need to keep charging it every day or two, depending on how long you use the device.

The report has also stated that "The Edge Plus has surprisingly good cameras. It doesn't oversaturate colors, nor does it try too hard to make your photos look good with overly aggressive processing and HDR (brightening darker areas and dimming bright areas) or making colors (especially greens) look neon, which are unfortunate traits on Samsung's Galaxy S20 and the OnePlus 8 Pro. "

So what is the problem with Moto Edge Plus? Well, the biggest setback for this phone is that it is solely a Verizon exclusive. Here's hoping that changes in the future.