Facebook's CEO Mark Zuckerberg has finally spoken up about his decision to allow the posts of United States President Donald Trump of "glorifying violence" regarding the protests against the death of George Floyd. Meanwhile, the government drone that was first sent to Minnesota to monitor the protests retreated to its base. But why?

On Monday, May 25, a video of an unarmed Black man, identified as George Floyd, was being pinned down by police officers, went trending. Floyd died, but the court did not issue any charges against the police. This event raised concerns in the never-ending racial discrimination among dark-colored skin.

Outrage by the death of Floyd, protestors in Minnesota appeared and torched a police building located in the area. After this, U.S. Pres. Trump posted a phrase on his social media accounts saying, "when the looting starts, the shooting starts." It was made controversial by people saying that these posts "glorify violence."

On Friday, May 29, Facebook's Zuckerberg finally explained his decision to allow Trump to posts controversial warnings to all looters in Minnesota protests.

"I know many people are upset that we've left the President's posts up, but our position is that we should enable as much expression as possible unless it will cause an imminent risk of specific harms or dangers spelled out in clear policies," he wrote."Although the post had a troubling historical reference, we decided to leave it up because the National Guard references meant we read it as a warning about state action, and we think people need to know if the government is planning to deploy force."

He also added that his company will explain this further on the White House.

Until now, Facebook and the White House haven't yet commented on the issue.

Minnesota drone sent back to base after a series of protests 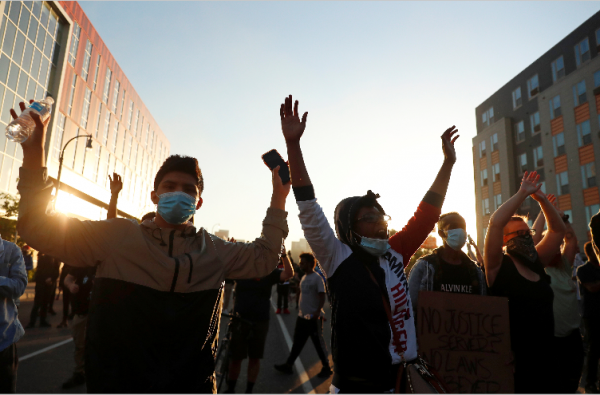 In line with the Minnesota protests, Boston Globe also reported that a drone tasked to shoot footages of the Minnesota looting and riot is now back on its base.

The U.S. Customs and Border Patrol mentioned that a drone was dispatched following the nights of protests in the area. It was said to provide live video of real events in the Minneapolis and needed to bring "situational awareness" to the authorities.

However, on Friday, May 29, the CBP requested to bring back the drone. It was returned to its base in Grand Forks, North Dakota, after "the requesting agency determined that the aircraft was no longer needed for operational awareness."

CBP did not mention which 'agency' requested the aircraft back.

ALSO READ: [VIRAL VIDEO] Black CNN Reporter That Was Detained in Minneapolis Amid Ongoing Protest for George Floyd is Freed