Amazon launches shopping carts that automatically monitor shoppers as they add items and charges them when they remove the grocery bags to encourage skipping the long checkout line. 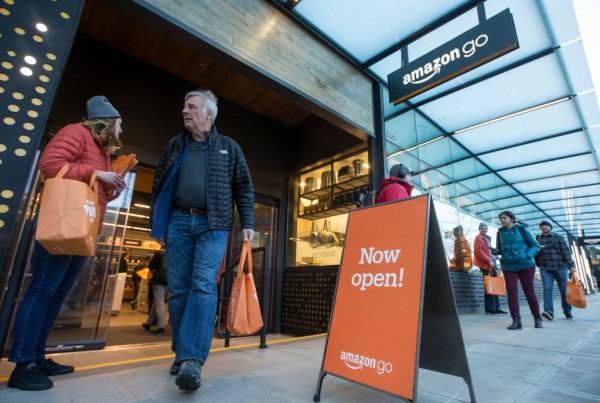 (Photo : Stephen Brashear/Getty Images)
A shopper walks out the the Amazon Go store, on January 22, 2018 in Seattle, Washington. After more than a year in beta Amazon opened the cashier-less store to the public.

The giant eCommerce revealed Tuesday, July 14, the Dash Carts will roll out at Amazon's new Los Angeles convenience store that is set to open this year. Dash Carts draw on the cashierless "Simply Walk Out" feature, which was first introduced in convenience stores at Amazon Go. Amazon Go stores opened to the public in 2018, allowed customers to purchase goods without standing in checkout lines.

In the past few years, the company has made inroads into the supermarket market. With cashierless technology, Amazon aims to make the shopping experience more convenient and differentiate itself from other traditional retailers.

Shoppers need an Amazon Account and a Smartphone to use a Dash Cart. Customers scan a QR code in the Amazon app upon entering the store, which signs them into the cart and loads the Alexa shopping lists. Every cart is fitted with cameras using computer vision to recognize objects inside the cart as they are placed in containers, and a built-in scale to measure them if appropriate.

Shoppers would type in the four-digit code and quantity of the item on display for products that record the weight and price. The cart also features a discount scanner that can add any rebates to the shopper's order. The carts are built for small to medium-sized shopping trips, where shoppers with one or two bags of products may leave the store.

A monitor on the front of the cart changes the overall price, as shoppers attach and remove items. Shoppers exit through the Dash Cart lane in the store when they are ready to go. The business will bill the credit card linked to their Amazon account. It will submit a copy of the receipt via email.

What's the difference between Dash Carts and Amazon Go?

Compared to Amazon Go stores, which deliver a range of on-the-go meals and snacks, the Woodland Hills grocery store resembles a traditional supermarket, both in its offerings and layout. The site of Woodland Hills will be part of a new chain of Amazon convenience stores scheduled to open in 2020, which the company was using during the pandemic to fulfill food orders.

The expanded offerings of the California store posed a range of new challenges when Amazon built the Dash Cart. Amazon's vice president of physical retail and technology, Dilip Kumar, said the full-size supermarket offers a "massive catalog of products."

"You need to be able to add that and keep track of all of that and it just increases the complexity," Kumar told CNBC. "Plus, the weighing component of it also has to be very robust to be able to allow for a very accurate receipt experience for a customer."