A former Google engineer developed a map that can track 750 million years of the world's history.

This interactive tool allows users to see how a city has changed throughout ages as well as learn how continental drift has changed the world.

Ex-Google engineer Ian Webster developed the Dinosaur Pictures website based on the PALEOMAP maps created by geologist Christopher Scotese. It packs complicated scientific data in a tool, which students, teachers, parents, or anyone interested in Earth history could easily use. 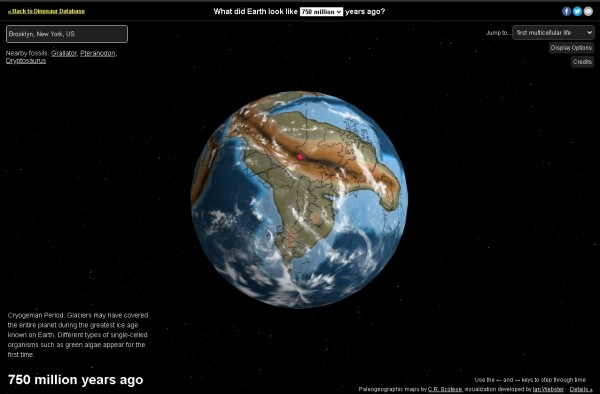 In an interview with CNN, Webster said that the Earth's history is longer than we can conceive while the current plate tectonics and continents arrangement may be different in the future. 'It shows that our environment is dynamic and can change,' Webster added.

The website shows how the Earth looks like during a certain period and each timestamp includes a brief explanation of the most significant developments that happened then.

Webster said that his software also 'geocodes' the user's location, then uses Scotese's PALEOMAP models to show the locations' images in the past.

"I built the interactive globe visualization and the geocoding and GPates integration myself so that people could plug in their own locations," Webster added.

Read also: "Ice Ship" Found Near Antarctica Via Google Map Claimed to Be a Capsized Boat

Users can visit the website where a rotating image of the globe can be seen. On the north of the globe is a question: "What did Earth look like ___ million years ago?" in which users may click on the drop-down menu to change the number of years and the Earth's image will transform accordingly. Users may also click on the drop-down menu on the northwest corner to find periods when specific organisms or species have appeared.

When the user question: "What did Earth look like 750 million years ago?", a description of what happened on the planet on that period is written on the southeast corner of the website. It says that 750 million years ago, Earth was covered by ice during the greatest ice age on the Cryogenian Period. 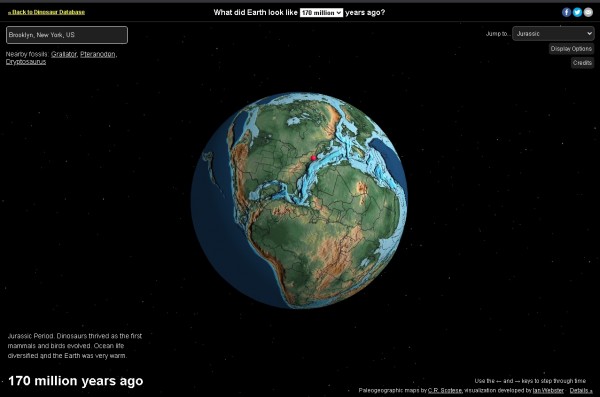 There were various types of single-celled organisms like green algae that appeared for the first time. However, if the user chose the first multicellular life on the "jump to" menu, the Earth 600 million years ago will show up.

Meanwhile, users can also enter a specific city on the box at the northeast corner to check how that city looked like throughout history. A pin will automatically appear to locate the city throughout time. To make it much easier, users may just click on the left and right to see how the city looked like million years ago.

There are also four display options to choose from: rotate globe, show clouds, show equator, and bright lighting. Users can pick one at a time, multiple options, or all at once.

The website gives credits to Scotese's PALEOMAP Project for the plate tectonic and paleogeographic maps used on the website. However, it also notes that some elements shown on the visualization like cloud and star positions may not be exact, although locations are to ~100 km while the colors of the maps are based on bathymetry and elevation.

Read also: NASA: An Asteroid Will Collide the Earth's Orbit on September 6 - It's Twice the Size of Great Pyramid of Giza