Apple wins a patent that combines augmented reality (AR) with thermal technology to turn any surface into a virtual touchscreen.

The recently approved AR technology patent, which would use thermal cameras built into AR glasses, could go to market as early as 2022.

Apple's patent titled "Method and Device for Detecting a Touch Between a First Object and a Second Object," is made possible through the tech giant's acquisition of the German AR software maker Metaio in 2015.

The Apple patent, which was granted on Apr. 22, perfectly described the technical details on how to turn Metaio's 2014 demo to reality, which Patently Apple explained.

According to Patently Apple's Apr.22 report, the Thermal Touch technology fuses information from an infrared and standard camera fitted with Apple's rumored head-mounted displays to transform nearly any surface into a touchscreen.

The cameras would capture the surroundings and detect thermal signatures from touching an object, and combine that input with the projected display to turn it into controls. 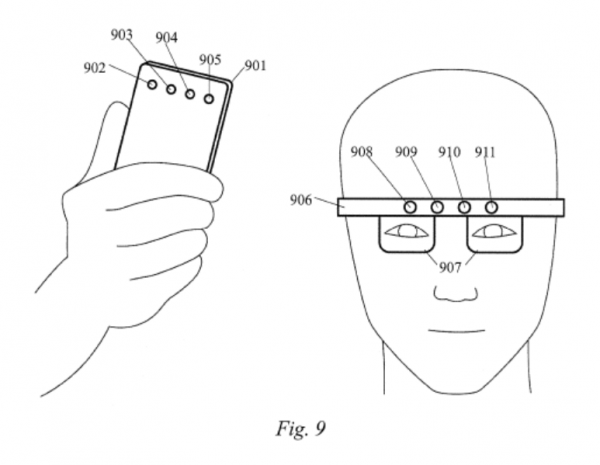 (Photo : US Patent and Trademark Office)
Fig. 9 shows two exemplary hardware setups that could be used in connection with the present invention.

This is just one of the many patents the U.S. Patent and Trademark Office granted Apple in recent months.

Just this April alone Apple was granted a patent for underwater features for iPhone, and a "Whisper Mode" for Siri.

Is Apple Ready to Enter the AR Market?

Rumors of Apple competing for the AR market had been going around as early as June 2020, when Bloomberg reported that the tech giant had been planning its launch with its two headsets codenamed N421 and N301.

The N421 was said to be the Apple AR Glasses, and would apparently be a lightweight headpiece that offers AR through Apple's existing ARKit technology. The rumored AR glasses are also said to include virtual meeting applications, games, and video streaming software.

On the other hand, the N301 will reportedly have a high-resolution display and cinematic speaker system that promises users to experience a realistic virtual world.

The N301 is believed to be marketed towards hardcore VR/AR enthusiasts and gamers, while the N421 is thought to be an Apple Watch equivalent.

The rumors also rooted in Apple's decision to acquire Metaio, the startup that was launched as an offshoot of a project at Volkswagen.

The German startup developed a technology called Thermal Touch and demonstrated the concept in 2014, which showed two users playing chess on an empty surface through AR glasses. It is believed to be the reason for the acquisition.