AMD Ryzen 6000 is still coming to laptops, and it looks like it's going to be good.

Digital Trends reports that AMD is going to push through with the Ryzen 6000 chips for upcoming name-brand gaming laptops next year despite skipping the 6000 series entirely on desktop. This was revealed in a leaked roadmap from an insider who goes by the name Broly_X1. 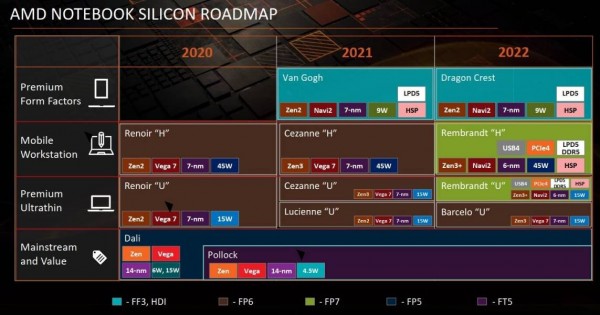 Looking at the image which was posted on TechPowerUp, you may see that it refers to a good number of categories. The most important chips detailed in the image are the ones in green, which are codenamed "Rembrandt H" and "Rembrandt U."

According to the image, these chips are going to feature Zen 3+ and Navi 2 integrated graphics, which basically means that they have to be the Ryzen 6000 series chips because Ryzen 5000 was Zen 3. Both chips appear like they're going to feature in mobile workstations and premium ultrathin laptops.

To round things off for 2022, AMD is also preparing a lineup of "Dragon Crest" APUs, which will be 7nm Zen 2 parts, highlighted in blue in the leaked roadmap.

There's no official word on the Rembrandt H and Rembrandt U chips for now, which means all of the information can only be taken from the leaked image. And from what's there, it looks like the tentative chips are going to be good, but not Earth-shatteringly great.

Both chips are going to be on a 6nm node and will have support for the upcoming DDR5 series of RAM. That on its own is already amazing because next-gen DDR5 memory has been teased about being super-fast. And since it looks like these laptops are going to feature an integrated GPU, that speed is going to be key. Aside from that, the new AMD processors are also going to support PCIe Gen 4.

As for improvements, "serious" isn't the best word to describe it here. The jump from 7nm to 6nm isn't much, which means that the Rembrandt CPUs aren't going to offer big performance jumps. They will be faster, but not that fast. Also, it's worth noting that these chips are more or fewer revisions of previous generation Zen 3 chips and not an entirely new lineup.

When Is This Coming Out?

Again, no release date has been revealed as of yet. For now, it looks like AMD is going to focus on making the most of TSMC's 7nm fabrication process for the year. The chips that will come out of that will be the mobile Cezanne APUs called "Cezanne H" and "Cezanne U", as well as "Lucienne U" and "Van Gogh."

Despite these rumored releases, AMD still has a big mountain to climb in the laptop market. Intel still dominates the scene, and rightfully so. But in the end, it's the consumers who are going to gain from the competition between Team Red and Team Blue.