Twitch streamer GeorgeNotFound has another suprise for his fans. The long-time Minecraft player has been playing the game since 2013. However, the sensational YouTuber mixed up his gaming experience through submerging half of his body in a large tub full of ice.

Did he beat the game? Let's find out.

GeorgeNotFound is Confident That He Will Beat 'Minecraft' Before He Freezes 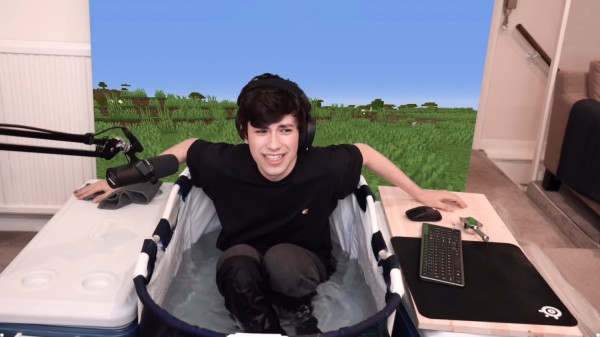 Streamers have various tricks on their sleeves to impress those who watch them. For the 24-year-old streamer who became popular for his Minecraft walkthroughs, the ice-sitting challenge is the next game-changing content that he wants to show to his fans.

The video which is nearly 24 minutes, has become one of the viral clips on Youtube in the last two hours. According to the video posted by the British streamer on his channel, he could beat Minecraft before he freezes in a huge cold container.

GeorgeNotFound said that he bought 500lbs or 225 kilograms of ice. Every minute from the very start of his stream, he will pour one scoop of ice into the tub.

Moreover, the YT star, who goes by his real name, George Henry Davidson, said that it feels weird to get soaked with his clothes. One of his co-streamers named Dream told him to sit down and relax before the game.

When the timer starts, GeorgeNotFound immediately heads to the trees to get some wood. After a minute, writing entitled "ICE TIME! Throw more ice in!" appeared on his screen. Every time it appears, he will need to pour a single scoop of ice into his bucket.

Read Also: Twitch Streamer 'Alinity' Files Police Report on Fans Showing Up at Her House, Says It is 'Harassment'

At the three-minute mark, Davidson said that he is beginning to feel some "ice burn." In the following minute, Dream instructed GeorgeNotFound to follow him since he will be doing an amazing thing. However, it turns out that Dream just successfully lured the Minecraft streamer into a pit--resulting in the demise of his character.

A couple of minutes later, another challenge to George from his friends. A wave of mobs marched towards him. When the text "ICE TIME" appeared on the display, the YouTuber was ambushed on the spot while pouring some ice on himself. In the next minute, he died again for the second time--in the hands of the numerous enemies.

The next moments were filled with trolling courtesy of Dream and Sapnap. GeorgeNotFound has two struggles this time--to trade with more mobs and endure the spine-chilling numbing of his body.

Dream has an interesting proposal for George: gold for a scoop of ice. The Twitch streamer agreed to the bargain which will even intensify his "cold" gaming experience.

The young YouTuber added that Dream needs to give him nine gold in exchange for three ice scoops. Dream approved of it but changed the rule to five golds for two scoops when George asked for more gold. The British star scooped 20 times so he could quickly trade for all the resources that he needed.

Did GeorgeNotFound Win the Ice-Sitting Challenge in 'Minecraft?'

The premiered video was nearing its end when George went on an even crazier change in mechanics. Dream suggested that he should put the remaining ice in the tub. The second container of ice is up next to be poured.

In the last moments of the stream, Davidson decided to pour a bucket full of ice into the tub for a bigger challenge. By the time that they were up against the Ender Dragon, he succumbed to another death before triumphantly finishing the game.

In the end, it was all worth it--the ice, the experience, the screams, and most importantly, the revenues after the stream.

Currently, the video has more than 600,000 views and 200,000 likes. According to Sportskeeda, GeorgeNotFound is one of the fastest growing "Minecraft" streamers this 2021.