Amazon MGM Acquisition: $9 billion Buyout to Happen on Tuesday, Is it for Prime Video?

Amazon would soon complete its acquisition of MGM Studios, otherwise known as Metro-Goldwyn Mayer, in a $9 billion buyout, the second-largest acquisition of the e-commerce company next to Whole Foods. Amazon and Jeff Bezos are growing their company and are taking a popular American media and productions company under their wing, possibly joining Prime Video. 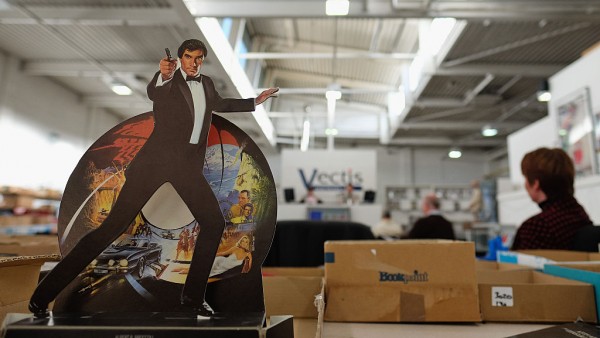 (Photo : Ian Forsyth/Getty Images)
STOCKTON-ON-TEES, ENGLAND - NOVEMBER 25: A cardboard figure of actor Timothy Dalton is displayed during a James Bond memorabilia auction on November 25, 2015 in Stockton-on-Tees, England. Around 700 lots of collectables spanning every James Bond film produced to date were represented at the sale, held to coincide with the latest James Bond film, Spectre.

MGM Studios is easily one of the most recognizable media companies in the world and has thrived in the industry for decades, but for 2021, it is somewhat the end of an era as it continues its future with Amazon. This goes alongside the recent switch from the classic roaring lion to a new digital and CGI opening billboard that replaces the iconic "Leo the Lion."

MGM is known for its feature films which have been part of American classics, including that of "Gone in the Wind," "Where Eagles Dare," and the adaptation of the novel series of 007 with James Bond's progressive career. On the other hand, Amazon has prepared Prime Video to be a studio of its own in the past years, bringing original series and films.

One of the most talked-about acquisitions for 2021 is this one, especially as it is a massive move from Amazon, aiming for a legend in the film and media industry. According to CNBC, insiders have reported that the earliest sale may happen by Tuesday but could spread out through the week, as preparations are made to push through.

The acquisition is valued at around $8.5 to $9 billion and still agreeing on a price for the media company's acquisition, which would be confirmed once Amazon owns MGM already. For now, the world is awaiting Amazon and MGM for their respective moves, especially as this could mean a lot for existing projects in both companies.

MGM has been looking for a buyer in the past years, and it includes the sale of its different divisions and the entirety of the company. On the other hand, Amazon is looking to expand its Prime Video and dedicate an acquired studio to work on the company's streaming subsidiary and media division to improve its media content.

Tom Clancy's "Clancyverse" is meeting Ian Fleming's "007," which are both American and British secret service-centered stories on two sides of the world. Recently, Amazon Prime Video has released "Without Remorse" from the Clancyverse to the box office, while MGM is set to release its "No Time to Die" with Daniel Craig as Bond.