"Dead by Daylight" did not disappoint the "Resident Evil" fans after it brought the popular horror game franchise as an official DLC( downloadable content) in the upcoming update.

The biggest questions among "RE" players are the identities of the killer and survivors. For the first time inside the survival, hack-and-slash game, the AI enemies will make it hard for the players to get away from the fear of being killed by the bloodthirsty murderers.

Who are the most anticipated killer/s and survivors that will soon arrive? Let's find out.

During the 25th anniversary of the "Resident Evil" showcase, Capcom has divulged the details about the possible arrival of "RE" in "Dead by Daylight." At that time, fans have been thinking of the contents that will soon be made. Many were also curious about the involved characters in the most awaited horror crossover this year.

According to Nintendo Life, there will be a new set of locations and features besides the most anticipated "RE" characters in the game.

Before we dive to the main DLC pack with the usual duo survivors and lone killer, there's a new game mechanic that will double the intensity of playing for the gamers--the addition of the AI-enabled enemies in the game.

The official website of Behaviour Interactive warns users to be cautious of approaching zombies. This is the first time that "Dead by Daylight" will be bringing the AI-powered killers since the game will only allow one user-enabled kill per round.

Imagine the hide-and-seek playstyle. That's the feature that players will experience first-hand if they want to survive the grueling chase from the flesh-eating zombies. It is expected that a new set of strategies will be soon developed by the survivors.

The Survivors and the Killer from 'Resident Evil' Chapter 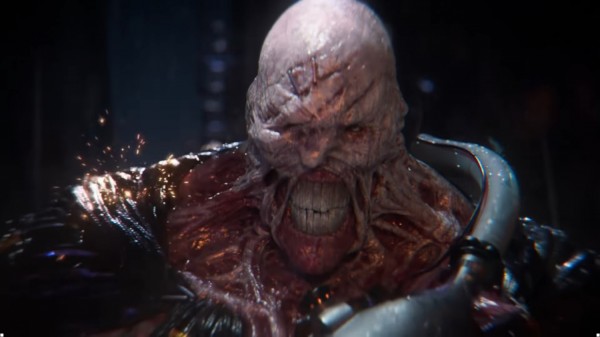 (Photo : Dead by Daylight via screenshot from YouTube)
Nemesis from "Resident Evil 3" as the new killer.

Here comes the most exciting part for the fans? Who do you think are the new survivors and killer/s in the game?

From "Resident Evil," "Dead by Daylight" will introduce Jill Valentine and Leon Kennedy as the two new survivors.

At the moment, Behaviour Interactive has not yet released any information about their possible perks, but from the looks of them, Leon can use a Flashbang to blind the monster. During the generator's repair progress, Leon can create a Flashbang through the locker.

On the other hand, Nemesis of "Resident Evil 3" will be the next killer. In the game, he will be named The Tyrant. His main weapon is his tentacles which become longer depending on the number of infected survivors.

To prevent the virus from spreading to their bodies, the survivors should find the vaccines in the new location--the Raccoon City Police Station which is also full of zombies which will add suspense to the game.

On all platforms, you can now play the "RE" DLC on Jun. 15. In addition to the package, players who buy it for $11.99 will receive an Umbrella Corporation charm for free, Game Revolution reported.