The United States (US) officially removes Xiaomi from the trading blacklist and "Communist Chinese military company" (CCMC) designation on Tuesday, May 25. The Chinese phone maker has been put in such a label on January 14, and, in response, the company sued the country to denounce it. 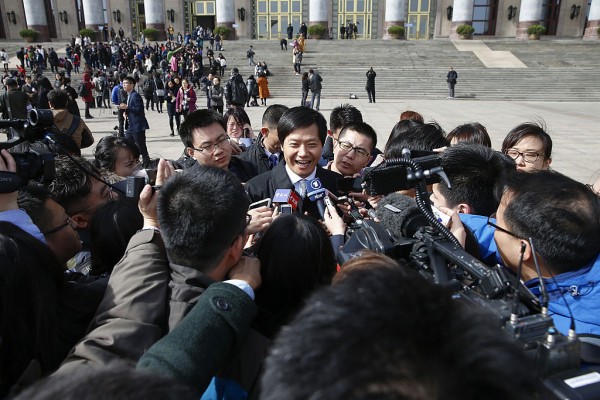 (Photo : by Lintao Zhang/Getty Images)
BEIJING, CHINA - MARCH 05: Lei Jun, Chairman and CEO of Xiaomi Technology and Chairman of Kingsoft Corp, talks to the media after the opening session of the National People's Congress on March 5, 2016 in Beijing, China. Assembly spokesman Fu Ying said that China's military budget this year to maintain growth, but the growth rate is lower than in previous years, is between 7-8%.

However, in a positive turn of events for the Chinese giant, Americans are again allowed to invest in Xiaomi as the U.S. backtracks its decision during the Trump administration.

On Wednesday, May 26, the Chinese tech manufacturer announced on Twitter that the U.S. District Court for the District of Columbia has finally ordered the Department of Defense to remove the company from the "CCMC" designation.

It would mean that the U.S. will be lifting the trading blacklist as well.

Xiaomi first hinted that its lawsuit against the U.S. is concluding on May 12. It has been bared that both parties have agreed to allow Americans to invest in its company again. During that time, however, the court has still yet to make its final decision.

Now, on the other hand, it seemed like Xiaomi won against the U.S. It is expected that the shares of the said company will gain the 9.5% that it lost in January due to the ban, GizChina reports.

Xiaomi's Growth Despite the Blacklist

"The Company is grateful for the trust and support of its global users, partners, employees and shareholders," Lei Jun, CEO of Xiaomi, said in a statement via The Verge.

Xiaomi also assured that it will continue in producing tech products and services at an affordable price. The company also shares its vision of creating a "better life" using its technology.

Despite the blacklist, the MI 11 line of the China giant has already sold 3 million units worldwide, GSMArena reported.

And still, Xiaomi remains to be the third-largest phone maker in the world, at least if shipments were concerned. In Europe alone, the company has been placed at the number two spot in terms of market share. As a result, Apple moved to the third spot.

The U.S. Department of Defense blacklisted Xiaomi and other eight Chinese companies from American investments in January 2021. It claimed that the tagged companies are working together with the Chinese military. Thus, calling them "Communist Chinese military company."

Xiaomi, however, insisted that they are not influenced or owned by the Chinese military. With that, the company filed a lawsuit against the U.S. government, in March, to prove it.