Another crazy listing is up online. This time around, though, it involves a McDonald's chicken nugget from the limited edition BTS Meal, that appears to be shaped like a crewmate in "Among Us." This outrageous collectible is being sold on eBay for a hefty price tag. 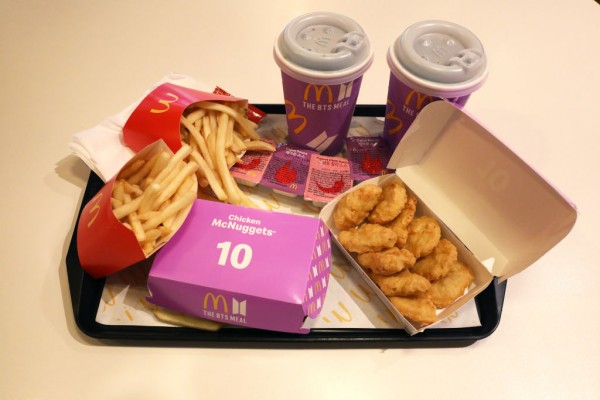 "Among Us," which launched in 2018, broke the internet in 2020. Since then, various twists have graced the game.

The surprising rise of the app is attributed to Twitch streams made last year.

For instance, popular streamers with millions of followers, like Pewdiepie and Shroud have been playing it. It has been popular as the world has been shut down by the COVID-19 pandemic.

With that, gamers stuck in the confines of their homes hopped on to the two-year-old cross-platform game. As such, Reddit and Twitter have been flooded with memes that propelled "Among Us" to received millions of downloads.

In 2021, the hype of the game has faltered when compared to its peak in mid-September 2020. However, eBay listing with a crewmate-like chicken nugget proves its relevance until now.

In addition, the popular multiplayer game is now available on PS4 and PS5 as well. There are maps and features expansions to enjoy too.

(Photo : Screenshot From eBay)
McDonald’s BTS Meal Chicken Nugget that seems to look like a Crewmate from ‘Among Us’ is now selling on eBay!

'Among Us' Chicken Nugget

The Mcdonald's BTS Meal has had its puff. Its empty packaging was even sold on Malaysia's e-commerce website for a whopping price tag too.

And now, the McDonald's and BTS collaboration found another level of craze on the internet -- with its crewmate-like shaped chicken nuggets listed on eBay. In hindsight, crewmates are the protagonists of "Among Us," the impostor is their opposite counterpart.

Furthermore, an eBay user named Polizna is lucky enough to stumble upon a chicken nugget that resembles a popular game character. And, interestingly, it certainly could pass as a crewmate silhouette. It is egg-shaped with two "legs" below it.

Read Also: McDonald's in Illinois Offers a Free iPhone Incentive for Staff Who Stay in 6 Months

How Much Is It?

Buyers could set their bids on the eBay listing. And currently, ComicBook reports, the highest bid is at $72 among the total of 31 bids placed already.

The original price of the nugget is higher -- to the tune of $1,396, as per ScreenRant. The seller has since dropped the price after a user complained that the "shipping was too much." But as of now, the initial listing could no longer be found. The one with a bidding option remains to be posted instead.

The bidding still has not come to an end. So, buyers should expect the price to still skyrocket.

Related Article: 'Among Us' FAQ: How to Play the Game, How Much it Costs, Why It Became So Popular

ⓒ 2021 TECHTIMES.com All rights reserved. Do not reproduce without permission.
Tags: McDonald’s McDonald’s BTS Meal Chicken Nugget Among Us
Most Popular