The cloud formation in the Martian environment is more unusual compared to what we see on Earth. Clouds only appear on the red planet during the coolest period of the year.

NASA's Curiosity rover has spotted that there were some of them popping up in the sky. The team has captured picture-perfect shots which tells us that Mars can also be colorful sometimes.

In NASA's announcement last week, the crew that controls the Curiosity spacecraft has detected the sign of a cloud formation from the recently-saved photos. Although the team has no expert in the study of clouds, the important discovery could pave the way for them to conclude that the Martian clouds are mysteriously different.

The international space agency said that the majority of the clouds seen on the red planet are made up of water ice. They are also identified at 37 miles or 60 kilometers (altitude). Additionally, the team said that the clouds could potentially contain frozen carbon dioxide since they are positioned at a cooler and higher height.

NASA continued that its scientists continue to study the cloud's altitude and they will also conduct more analysis about the images shot from the Curiosity rover--to determine the dry-ice and the water-ice clouds.

'Mother of Pearl' Clouds Give Color to the Planet 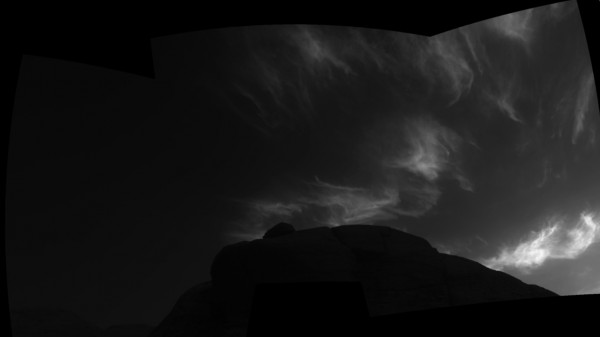 (Photo : NASA/JPL-Caltech/MSSS)
"Mother of Pearl" or the iridescent clouds in the Martian sky.

The study does not end in merely recognizing the early clouds. NASA said that what they saw was a beautiful mix of various colors coming from the iridescent and noctilucent clouds.

As shown in the photos below, the noctilucent type of cloud has been displayed. The formation imitates the appearance of the "twilight" clouds which are said to become darker after the sun descends.

Scientists from NASA gathered the information from the captured images from the rover for the estimation of the noctilucent clouds' altitude, Gizmodo reported on Monday, May 31.

The Curiosity rover team shot the images through the MastCam which flashes minute glimpses of the colorful glow of the Martian clouds. The "mother of pearl" clouds or the iridescently-shimmering formation has given Mars a colorful pattern that we should behold.

"If you see a cloud with a shimmery pastel set of colors in it, that's because the cloud particles are all nearly identical in size," Space Science Institute atmospheric scientist Mark Lemmon said during the NASA announcement.

Sometimes, it would take a long time before we see beauty in something. For instance, all we could think of Mars is its reddish soil and the bland craters on its surface. Little did we know that there's more to looking to these common things that we use to generalize the red planet.

Lemmon added that the case of the cloud formation on Mars can happen after all of the clouds grow at the same rate.