Jeff Bezos: Going to Space is Risky, Despite Owning Blue Origins and Having the Right to Do What He Wants

Jeff Bezos is soon going to space, being the first CEO to embark on this adventure towards the Earth's outer atmosphere with Blue Origins' New Shepard spacecraft. There are massive perks in owning a space agency, and it could truly make one's space dreams come true. However, there are also two sides to every story, and as much as this is a benefit, it is also risky for the 57-year-old Amazon CEO.

Jeff Bezos is Going to Space with Blue Origin 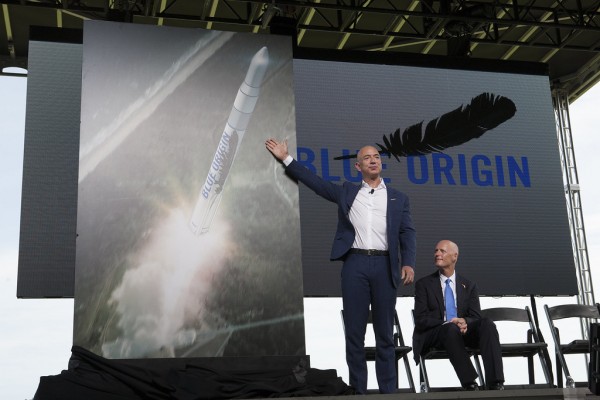 (Photo : NASA Kennedy/Creative Commons)
Jeff Bezos' Blue Origin announces the delay of its next-generation rocket, The New Glenn, back to late 2022, saying that the loss of key Pentagon launch contracts to competitors Elon Musk’s SpaceX program and United Launch Alliance (ULA) was the primary reason for its delay in the schedule.

One of the world's most profitable billionaires is going in a once-in-a-lifetime opportunity to board a spacecraft and see the world from afar, despite being a civilian with no background in being an astronaut. That being said, this opportunity is also a risk for Bezos, especially as he is a civilian, which may or may not handle challenges that come with going to space.

Surely, Bezos has trained physically and mentally to get up to speed for this process, but it is still something that does not happen overnight. The billionaire is known to have founded Blue Origins to make space travel commercial and available for the likes of him, with the New Shepard spacecraft aimed to bring six people into the atmosphere.

Read Also: How Much Tax Do Billionaires Pay? Report Says Musk, Bezos, and More 'Paid Next to Nothing'

As a lifelong dream soon to be fulfilled, it would be an achievement and a surreal experience for Bezos. However, if the flight goes south or complications arise, it would be more of a nightmare for the CEO, especially as there is no going back from the moment their spacecraft launches towards the outer atmosphere.

Let's talk about the risks. For one, Jeff Bezos is already 57 years old, meaning that he is already past the ideal "middle age" for the average human life which is around 80 years old. Bezos might be fit and healthy for his age, but there are certain limits to a human body that may complicate things, or develop something after the said flight.

Moreover, he is subjecting his body to the orbital velocity of 17,000 miles per hour at the minimum, according to CNN, based on the flights of SpaceX's crewed mission. This speed is required to propel away from the Earth and keep gravity at bay from pulling them back to the ground.

Subjecting one's self to that kind of an extreme event is risky, even for an average astronaut who has trained all their life for the said mission.

This is not yet taking into account the gravitational force (G Force) which would be opposing them as they go up, and the different factors including the success of the spacecraft and how it would handle the takeoff. Good thing is that the New Shepard has had a massive count of successful suborbital test flights in both takeoff and landing maneuvers.

Still, it would be an achievement for Bezos' lifelong dream to go higher than any other CEO would go, and that is 62 miles off the coast.