Pikes Peak: Tesla Model S Plaid Emerges on Top,Hailed As the Fastest in the Exhibition

Pikes Peak Exhibition declared the Tesla Model S Plaid as the fastest car of the class. The 2021 lineup of the contenders was unexpected, and people have mixed opinions about the possible winner. The notable change that happened this time was the shortening of the course due to changes in the weather conditions. 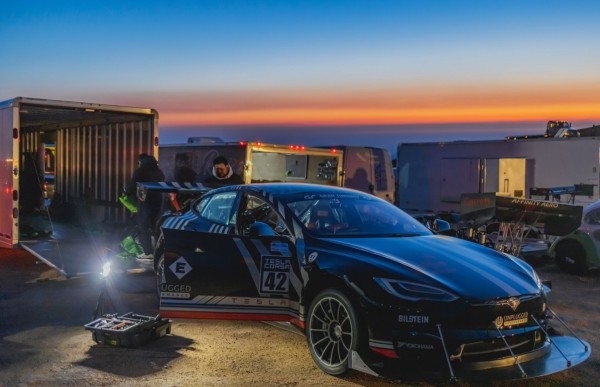 As far we are concerned about the Model S Plaid's victory, the crew behind has spent many years rebuilding the car. After an accident in the Tesla EV, the team focused on improving the car parts to develop its thermal capacity. The Unplugged team has been looking forward to this exhibition--and successfully redeemed its glory.

Pobst, who was the show's main man, has been eyeing to come back with a strong statement this time. Pikes Peak has been on a hot start following the introduction of the most luxurious and fastest cars in the world. The story that took place last year became a lesson to the team.

When the Pikes Peak team has been formed, Tesla has begun tuning the parts for the Model S Plaid. Several upgrades have been accomplished to make the car more competitive. In addition, they also conducted multiple practices before the Exhibition Class.

Read Also: Tesla Model S Plaid Delivery Event: How to Watch Live as It Arrives in the Fremont Factory

According to a report by Teslarati on Sunday, June 27, the 2017 Acura NSX stood as the most dominant model among all competing cars. In this 2021 event, race car driver Nick Robinson clocked 7:14.704 while using it. His previous performance was 40 seconds slower.

While these are all Tesla cars, Randy Pobst managed to surpass them and completed the race with an emphatic finish. People have high hopes that Robison's NSX would win the exhibition, but the Tesla Model S Plaid has more things to offer than it.

When the Tesla EV accelerated, the shortened course heard the resounding cheer from the crowd. Pobst dethroned Acura NSX after timing 6.57.220 in the exhibition class summit.

Pobst is 'Ecstatic' About the Results With Model S Plaid

In an interview with Out of Spec Studios on YouTube, Pobst said that this year's race was "phenomenal" on his part.

"It was a good run. We ran good. Loads of power, took everything the Yokohama slicks had to offer, let me tell you. We have done a little sway bar change to try and balance it better. I'm really glad we did. The brakes held up. The suspension was fantastic," Pobst said.

Later, Unplugged Performance posted on Twitter that they had been expecting the model to finish at 9:20, yet it managed to finish at 6:57.220 during the shortened course. The team said that the full run was impressive.

This year, the Pikes Peak competition proved that the Tesla Model S Plaid could reign supreme in one of the most dangerous events in the world of racing. The Unplugged Performance team, together with Pobst, has a long way to go for what's coming next.