Hamako Mori is a 91-year-old grandma from Japan.

Now, that doesn't sound as impressive, does it? The thing is, that's only one part of who she is. The other part is that she's considered the oldest YouTube gamer by the Guinness Book of World Records, no less. Now that's something to grab your attention. 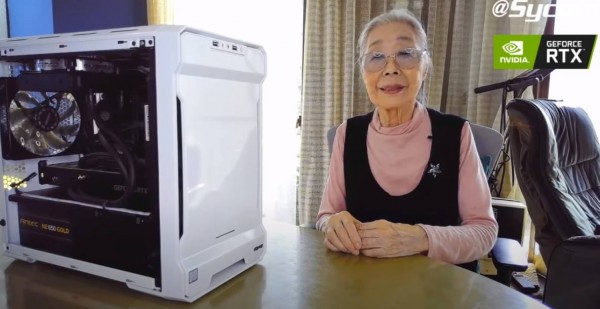 And she's not just what many would call a "casual," too. She plays what most gamers in the world play these days. She's played some "GTA 5," "Cyberpunk 2077," "Ghost of Tsushima," and her latest playthrough as of this writing is that of "Resident Evil: Village." So no mere mobile games here.

Here is her story.

Mori actually didn't start "late," if you could believe it. She first picked up a video game 40 years ago, in the early 80s, when she saw children playing them and got curious. Eventually, she'd continue playing until becoming well-known last year, when news outlets such as 7 News Boston picked up her story.

According to her page on the Guinness Book of World Records, Mori's reason for picking up gaming was quite simple. While watching youngsters play, she thought it was fun and "unfair" if only children were playing them. Her first gaming console was the Super Cassette Vision, which was released only in Japan back in 1981. And so far, she's saved almost every gaming system she's ever owned because it brings her good memories.

Right now, Mori's go-to console is the Sony PlayStation 4, where she's currently playing Capcom's "Resident Evil Village," according to her YouTube channel. But that's not her only system. In a video that has garnered over 1.8 million views so far, she unboxed a prebuilt gaming PC that NVIDIA Japan gave her as a gift. It's quite a powerful system, too: it features an Intel Core i7 9700K and an RTX 2080 Super. Not too shabby.

Read also: Prebuilt Gaming PC 2021: Why You Should Consider Buying One Right Now

Half A Million Subs

She keeps the channel well-updated too, posting a video every week and gaining over 500,000 subscribers as of this writing.

For someone who's 91 years old, she's a pretty good player too. Just watch this YouTube video of her playing "Cyberpunk 2077," a first-person shooter, and see her shooting accuracy in action. In fact, she even manages to win in "Knives Out," a battle royale game in the vein of "PUBG" and "Fortnite." So, for those who assumed she was playing on "easy" mode, think again.

While she's played a lot of AAA games on her channel to date, Mori claims that her favorite title is actually "Grand Theft Auto 5." According to her, the game "looks like a film" and is a personal favorite because of the age restrictions, meaning only adults like her could play it.

Gaming Has No Age

Hamako Mori is the oldest YouTube gamer out there, which proves a really valid point about gaming as a whole: it has virtually no barriers.

And Mori isn't the first elder to try video games out, as well. "Skyrim" fans likely know about Shirley Curry, also known as "Skyrim Grandma" who exclusively plays the massively popular "Elder Scrolls" title on her YouTube channel. Like Mori, the 85-year-old also has a popular channel with around 970k subs at the time of this writing.

Gaming might have had an on-and-off relationship with folks of the older generation in the past. Many have claimed that they "promote violence" or "train murderers." But with what Hamako Mori and Shirley Curry are doing, they prove that video games as a hobby don't have an age requirement. It doesn't matter if you're old or young--you will have fun.

Related: Video Games 101: How to Choose the Video Game Platform that is Best For You

WATCH! Skyrim Grandma Takes A Break After Internet Trolls Pushed Her To Her Limits

Prebuilt Gaming PC 2021: Why You Should Consider Buying One Right Now