"World of Warcraft's" top Twitch streamer, Asmongold, attempted to experience "Final Fantasy 14," after constantly trashing the former. However, the excitement of fans of the latter instead made the first stream a complete mess. 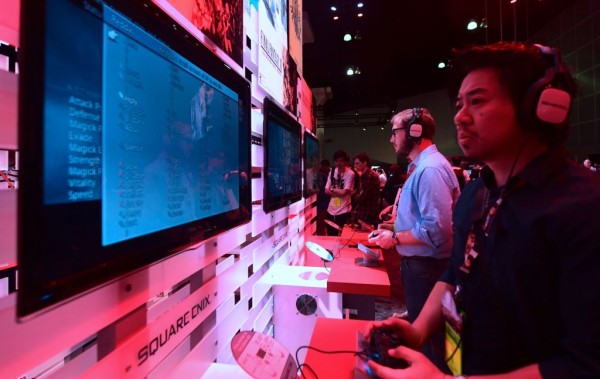 (Photo : FREDERIC J. BROWN/AFP via Getty Images)
Gaming fans play "Final Fantasy The Zodiac Age" from Square Enix on day two of E3 2017, the three day Electronic Entertainment Expo at the Los Angeles Convention Center in Los Angeles, California on JUne 14, 2017. E3 is one of the biggest events in the gaming industry calendar.

According to Dexerto, Asmongold mainly streams the MMORPG game, "World of Warcraft" on Twitch. Nevertheless, the famed gamer has been lashing out issues about the game, in which he pinpoints areas wherein the developer of the game, Blizzard, got it wrong.

GameRant reported that "World of Warcraft" is definitely the gold standard of MMOs, and no other title has come near its success. Well, not until "Final Fantasy 14" had its fair share of MMO fame as well.

As such, Asmongold jumped over the fence to play "Final Fantasy 14."

His monumental stream, marking his first time to play the game while broadcasted live, caught the attention of its fans. Approximately 200,000 folks watched him experience "Final Fantasy 14."

Asmongold goes on to Twitter to dub his first live stream of the game one of the best he has ever had, and assured that he will come back for more.

Thanks for watching today guys, one of the most incredible streams I've ever had playing Final Fantasy 14, I would have never expected!

I'll be back on tomorrow morning for more!

In other "Final Fantasy 14" related news, here are the new stuff that graced the game during the Fan Festival on May 15.

The excitement of the game's fans led them to vie for a chance to play with the famed Twitch streamer by entering the room he is in.

It is to note that the beginning of "Final Fantasy 14" initially only allows a single-player option. Later on, the player gets to meet other users in the starting town.

When Asmongold reached that point, fans of the game started spamming moves as they encountered the steamer in the public arena.

At first, it seemed to be a warm welcome for the Twitch streamer. However, it did not take too long before it ended up in a complete mess.

As the players continued spamming Asmongold endlessly, the effects distracted the streamer from actually playing the game. It further hindered him from going through the gameplay and eventually taking down the servers.

That said, other players trying to enter the Cactuar server have been booted out or queued as it has reached its full capacity.

Asmongold Not Welcomed in Final Fantasy 14

Meanwhile, another streamer of "Final Fantasy 14" is dismissive of Asmongold newest move, saying that the game's community is not tolerating "kind of hatred and rudeness."

The pronouncement of the small streamer caught the attention of a "World of Warcraft" developer, in which he replied calling Asmongold an "a**hole."

As of writing, the tweet of the Blizzard developer has since been deleted.

Elsewhere, here's a guide on how to unlock all crafting and gathering jobs.