Nintendo Switch fans, maybe this is the one thing you've been waiting for, or maybe not. But it's good news nonetheless.

After being rumored for so long, Nintendo Switch Pro, one of the most awaiting consoles, may have finally been announced. Or at least, an upgraded version of the Switch with much better hardware. According to Tom's Hardware, the new Switch isn't actually called the "Switch Pro," but the "Switch OLED Model." Retailing for $349.99, it is scheduled for an October 8 release.

The new Nintendo Switch features a brand-new 7-inch OLED screen (as is in the name), a fresh coat of white paint on the controllers, and an adjustable stand for tabletop use. Aside from that, the handheld also features a massive 64GB of internal storage (literally double that of the old model) and a LAN port. No more slow Wi-Fi!

This announcement comes as a legitimate surprise, considering Nintendo didn't reveal anything during their much-anticipated E3 2021 showcase. It's also worth noting that Nintendo of America president Doug Bowser dispelled any notion of the Switch Pro earlier in June. According to him, a hardware upgrade wasn't in the company's priority, though he didn't exactly say no to releasing an improved Switch handheld.

Read also: Nintendo Switch Sales Go Past 84 Million, But Are We Still Getting A Pro Model Soon, Though?

Believe it or not, the OLED screen was actually rumored earlier this year, which confirmed that leak as accurate. According to those reports, the screen upgrade is not just aesthetic but functional. OLED screens offer much faster response times and better contrast while also consuming less power. 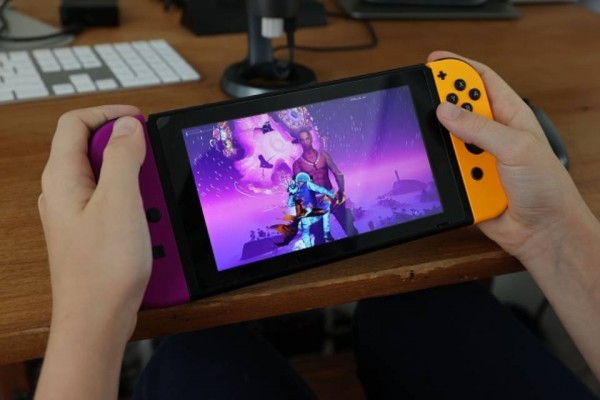 Back to the Nintendo Switch OLED, it also looks like the new screen will be driven by upgraded hardware. According to the official specs list on the Nintendo website, the new Switch uses a "custom NVIDIA Tegra processor," with a noticeable lack of details. As such, nobody knows what the new Switch can do graphically, but one can assume. This will be explored later.

Is It 4K-Capable as Early Rumors Suggested?

There's reason to say that it is not. At least not until Nintendo themselves include that in the marketing.

But going back to the early rumors about the Nintendo Switch Pro, it was alleged to feature the same Tegra chip. Though back then, nobody knew which exact one, until this June when more details popped up. According to those reports, the Tegra chip is codenamed "Orin," which features a 12-core CPU with an Ampere GPU (the same one in the RTX 3000 series, but a lot less power so it can fit in a handheld system).

While it's safe to say that the Nintendo Switch OLED can't output 4K, it can very well be capable of rendering resolutions as high as 1080p (in TV mode) like the older models. Whether it's native Full HD or upscaled, however, no one can confirm yet.

Related: Nintendo Switch Pro to Launch With 'Legend of Zelda: Breath of the Wild 2?'

Nintendo Switch Pro to Launch With ‘Legend of Zelda: Breath of the Wild 2?'

Nintendo Finally Breaks Its Silence on the Switch Pro Rumors