Olympic Village Cardboard Beds: TikTok Video Shows How Many Olympians It Can Take Before Breaking

The Tokyo Olympic Village cardboard bed frames have caught the attention of spectators and athletes during the 2020 Olympic Games.

Now, a viral TikTok video put it to a durability test with Olympians jumping over the mattress simultaneously until it breaks. 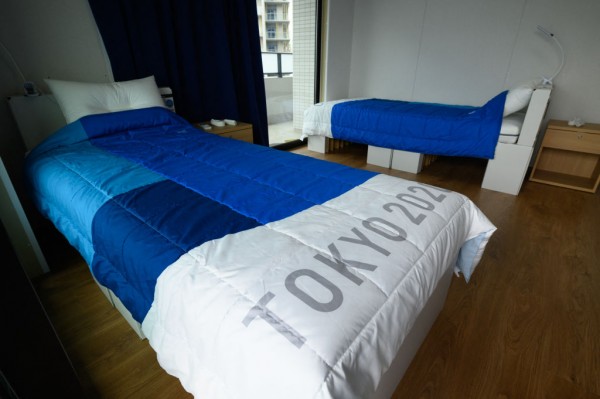 (Photo : by AKIO KON/POOL/AFP via Getty Images))
Recyclable cardboard beds and mattresses for athletes during a media tour at the Olympic and Paralympic Village for the Tokyo 2020 Games, is seen in the Harumi waterfront district of Tokyo on June 20, 2021.

One of the reasons why the strength of the Olympic Village recycles cardboard beds is being questioned by some comes after speculation floated, saying that it was strategically placed there to prevent athletes from having sex.

As such, it will prevent them from being in close contact, which will ideally prevent the spread of COVID-19.

However, the social media theory has already been dismissed by the New York Times. Not to mention that the general manager of the Athletes Village, Takashi Kitajima, previously boasted that the recycled beds hold up to 440 pounds capacity.

Meanwhile, Today revealed that the real purpose of the unusual design of the beds in the Tokyo Olympics is primarily sustainability in nature.

With rumors saying that the Olympic Village beds are not strong enough to fit two people, a viral TikTok video posted on June 26 finally tested its actual strength.

The viral video starred an Israeli baseball player who goes by the name Ben Wanger, along with other fellow Olympians. Their agenda is to figure out how many of them it will take before it collapses by hopping on the bed frame.

The video begins with Wanger, who also plays for the American team named the Lancaster Barnstormers, saying that he and his fellow Israelis would like to "answer questions about the beds in the Olympic Village."

How Many Olympians Can it Take Before Breaking

Wanger, who goes by the TikTok username bwangah, initiated the test by jumping on the bed by himself. He was then joined by another player, but the bed remained upright. The video went on to see more athletes adding up to the people hopping on the mattress.

By eight, the frame seemingly almost broke but it continued to stand straight. And, when nine of them jammed together over the bed jumped simultaneously, the recycled frame collapsed in the middle.

The TikTok post went on to show the aftermath of the jumping spree that the Israeli Olympians did.

Read Also: TikTok is Testing a New Feature Similar to Cameo That Lets You Pay Creators for Personalized Videos

According to Insider, other Olympians also posted videos to test the durability of the popular cardboard bed, which included an American rugby player, Ilona Maher, and an Irish gymnast, Rhys McClenaghan.

But it was the first time that multiple athletes tested the strength of the recycled frame simultaneously.

Furthermore, Olympic bed content has been flooding TikTok using the hashtag #cardboardbed, amassing over 5.3 million views as of writing.

Elsewhere, Twitch has been banning streamers for showing highlights of the Tokyo Games and its location. Additionally, here's an Olympic Games robot's three-point shooting during halftime.

Related Article: TikTok Auto Video Removal of Raunchy and Violent Videos For Minors to Use Safely | Here's How