This Fortnite gamer plays the sough-after battle royal even with the absence of his hands. Instead, Rocky Stoutenberg or "RockyNoHands" uses his mouth to smash world records. 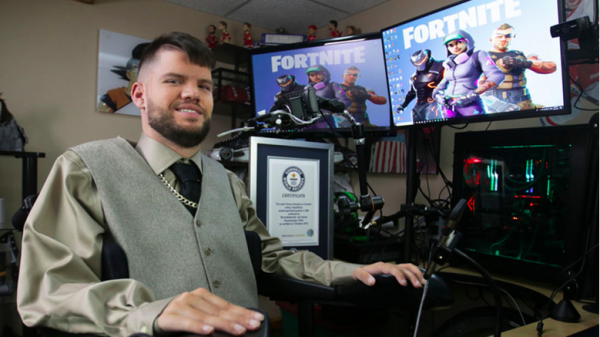 (Photo : Screenshot from Guinness World Record Website )
Meet the Fortnite gamer that plays the top-notch battle royale without any hands, and uses his mouth instead to achieve record breaking victories, Rocky Stoutenburg or "RockyNoHands.”

RockyNoHands, also dubbed as "the oral assassin," legendarily wins over other squads and reigns as the victorious player even if he only uses a mouth-operated joystick.

Stoutenburgh uses his mouth via a Quadstick controller to play not just "Fortnite." He also plays other popular battle royale titles such as "Call of Duty: Modern Warfare," and "PlayerUnknown's Battlegrounds."

But why is he playing these games with no hands?

No, he's not trying to show off, the story behind it more tragic than that, yet he prevailed in smashing records--world records, at least for "Fortnite."

As per PCGamer, RockyNoHands was involved in an accident that led him to be unable to use his hands from playing games like "Fortnite."

To be precise, 11 years ago, wheb Stoutenburgh was just 19 years old, he accidentally fell nastily, which broke his spinal cord and dislocated his thoracic vertebrae or the group of tiny bones along the spine of a person.

Due to the dislocation, the "Fortnite" gamer could no longer roll his shoulders freely.

However, this unfortunate incident did not stop him from going on with his life and playing the games that he likes.

It is worth noting that he is currently an active streamer on Twitch, albeit his condition is called quadriplegia, or paralysis from the neck going down the spine. Not to mention that RockyNoHands wins his weekly battle royale sessions, even if he says that it was not an easy task.

RockyNoHands: Getting Back to Gaming

Stoutenburgh did not get back to playing his favorite gaming titles as soon as he got out of the hospital. It was a gradual process for him.

Actually, he did not even go back to gaming for several years after his accident as he focused on recovering from the injury.

Plus, back then, tech catering gamers similar to him were limited.

Gaming only struck his mind after he learned about a controller specifically designed for his quadriplegics condition.

Stoutenburgh recalled that it was his brother that stumbled upon the controller online, and noted that he first played with it on "Call of Duty." And after that, he just continued doing it with other games.

Fast forward to 2020, RockyNoHands continues to smash records through his legendary victories.

Elsewhwere, "Fortnite" is rumored to be collaborating with "Among Us" as some dataminers suggested.

Related Article: Gamora 'Fortnite' Skin | Take a First Look at the Green Warrior from Guardians of the Galaxy