CryptoPunks NFT, or non-fungible token creator, Larva Labs, signed with the major Holywood Talent Agency, the United Talent Agency, or the UTA, in a deal that will pave the way for the project to be part of movies, and video games--among others. 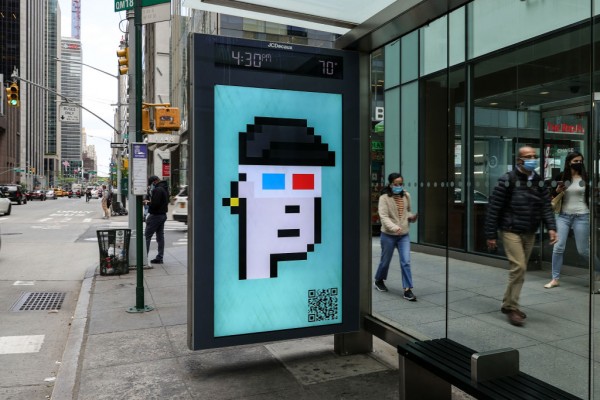 (Photo : by Dia Dipasupil/Getty Images)
NEW YORK, NEW YORK - MAY 11: People wearing protective masks walk past a CryptoPunk digital art non-fungible token (NFT) displayed on an electronic billboard at a bus shelter in Midtown Manhattan on May 11, 2021 in New York City. The image is part of SaveArtSpace's "Pixelated" public art exhibition which will be displaying 193 of Larva Labs' CryptoPunks on phone booths, bus shelters, and billboards around New York City during the month of May.

Meanwhile, other NFTs, such as Meebits and Autoglyps also inked a deal with UTA.

The latest deal with the top Holywood agency adds to the success that the developers of CryptoPunks NFT have been achieving.

It is on top of the CryptoPunks 3100 listing last Aug. 2 that carried a whopping price tag of $90 million--its biggest price ever.

As per TechCrunch, the intellectual property agreement allows people to see CryptoPunks not just on the big screen, gaming consoles, TVs, and other branding projects as well. However, the specific terms of the deal have yet to be unveiled.

The head of the Digital Assets division of UTA, Lesley Silverman, told Holywood Reporter that the deal with the CryptoPunks creators marks "one of the first opportunities for an IP that fully originated in crypto-world to enter broader entertainment space.

Silverman further praised the creators of CryptoPunks, noting that "they really have hit the zeitgeist in a tremendous way." He further said that the feat is well-deserved.

On the other hand, the co-founder of Larva Labs said that the new deal will provide more exposure for the NFT project, as well as protect and bring up its value.

Meanwhile, UTA will also be representing other Larva Labs NFTs like Authoglyphs and Meebits.

CryptoPunks and the Mainstream

The popularity of CryptoPunks is not only intriguing to NFT enthusiasts. Mainstream firms are also joining the latest trend.

On top of that, Visa further announces support for NFT creators, artists, and even collectors that have been driving success to the new world of commerce.

It is worth noting that the popularity of CryptoPunks has exploded recently, skyrocketing the NFT sales in August to $900 million that figured a slump in July.

The record-breaking figures were mainly attributed to the impressive sales of CryptoPunks and the influx of 'Axie Infinity' active users.

The popular NFT project in the Ethereum blockchain was first to launch way back in 2017, making it one of the oldest in its nature, CoinTelegraph reported. In addition, CryptoPunks was developed by Larva Labs, a two-man team firm by Canadian software developers Matt Hall and John Watkinson.

It is to note that Larva Labs released a total of 10,000 pixelated figures called CryptoPunks that was generated by an algorithm.