"League of Legends" movies or even a TV series could be possible in the near future as ex-Netflix exec, Brian Wright, joins Riot Games with a key post for its entertainment division. 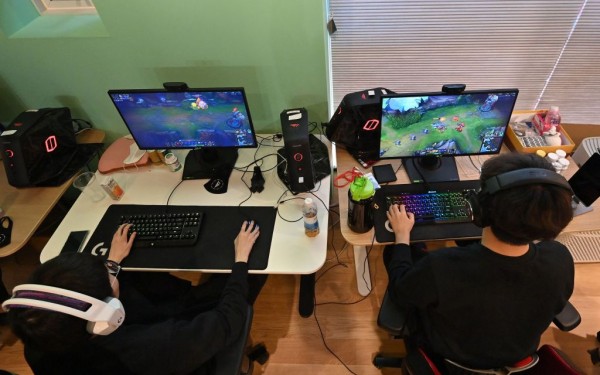 (Photo : by JUNG YEON-JE/AFP via Getty Images)
This picture taken on February 25, 2021 shows gamers during their training session at the T1 building, one of the world's top eSports organisations where dozens of professional and budding gamers train, in Seoul. - A Nike-sponsored gym, support staff including nutritionists, and English language classes are all part of the set-up at T1 where around 70 gamers are looking to emulate its highest-profile member, League of Legends giant Faker.

Wright worked with Netflix on some of its popular original content, like "Stranger Things," "13 Reasons Why," "The Umbrella Academy," "Fuller House," and "The Chilling Adventures of Sabrina"--to name a few, Variety reported.

What's more, Wright also managed to ink the deal of Netflix and Ryan Murphy. After that, the streaming service giant continued to collaborate with other prominent names like Shonda Rhimes, the Duffer brothers, and the Obamas.

As per HollywoodReporter, the former Netflix exec will head content at the entertainment studio of the "League of Legends" maker as the Chief Content Officer.

The outlet further noted that Wright will be under the leadership of the president of entertainment of Riot Games, Shauna Spenley.

Meanwhile, according to IGN, Wright will be developing various entertainment pieces, including films, TV, and animated series.

The ex-Netflix exec will further work to bridge both the lucrative world of gaming and entertainment industries, which has been the trend today.

TechRadar reported that Wright said that he is "beyond thrilled" to work with the gaming giant, adding that he "can't wait to bring more vibrant stories to players and fans around the world."

It is worth noting that Riot Games is not only known to be the game developer of the top MOBA game, "League of Legends." It was also behind the sought-after first-person shooting game, "Valorant."

Read Also: 'League of Legends' eSport World Championship 2021 is Moved From China to Europe Due to Travel Restrictions

Also, it is not the first time that the "League of Legends" maker hinted at working on an entertainment and gaming crossover.

To be precise, Riot Games is currently developing "Arcane," the upcoming animated series that is based on the "League of Legends" world, coming soon to Netflix.

On top of that, the "American Vandal" creator revealed that they are also working on a mockumentary that tackles a fictional esports team that plays the "League of Legends" professionally.

In addition, Riot Games serves as one of the producers of the series. On the other hand, the show that goes by the name "PLAYERS" will be streaming on Paramount+.

Elsewhere, Netflix is also working on a video gaming development endeavor. It has already hired the former vice president of the Oculus virtual reality of Facebook and ex-EA executive, Mike Verdu.

Related Article: 'League of Legends' Collection Teased by Riot Games and Uniqlo; Patch 11.9 Sees Nerfs to a Handful of Champs