SpaceX's reusable rockets are its foundation, and the company will continue to bring these types of spacecraft in the future, particularly with the Falcon, Dragon, Starship, and more. Elon Musk has always pushed for reusability for its spacecraft and said that this would be the key to humanity's future as a multi-planetary species.

A lot of projects from SpaceX are coming soon, and one of them is its Mars-bound spacecraft known as the Starship, which is gearing up for its full-stack test flight with the Super Heavy Booster rocket. Multi-planetary life is aimed for Mars as its first destination, something which SpaceX and Elon Musk are aiming for within this decade.

SpaceX Reusable Rockets: Key to Back Up Biosphere

SpaceX is known for its numerous successful launches, bringing people and cargo up to orbit, particularly towards the International Space Station, as part of NASA's Commercial Crew mission. While this is the only passenger mission that the company has done, it is aiming for the neighboring planet of Earth, the Red planet.

It is hard to overstate criticality of reusable rockets. No less important than reusable aircraft, cars or bicycles.

Essential for humanity to become a multiplanet species & backup the biosphere.

In a tweet, Michael Sheetz scaled the Kennedy Space Center to the recovered rocket of SpaceX, which is the Falcon, highlighting its enormous body compared to the building. The process of recovery is integral to the company's reusable feature, as it needs the same spacecraft to be used for its next mission.

To this tweet, the SpaceX CEO replied, and then again preached about how important reusable rockets are in the present society. To date, Musk's SpaceX is the only reusable spacecraft company that has debuted its products and made them widely available to the world, including that of major partners like NASA and other government agencies.

Musk said that overstating the importance of reusable rockets is hard, but he will continue to do so.

Reusable rockets are as important as reusable aircraft, cars, or bicycles, says the billionaire, and it is known that bikes are sustainable as they do not produce any emissions when used. In terms of cars, one of Musk's companies is also known to be a "clean energy" company, and that is Tesla with its electric vehicles. 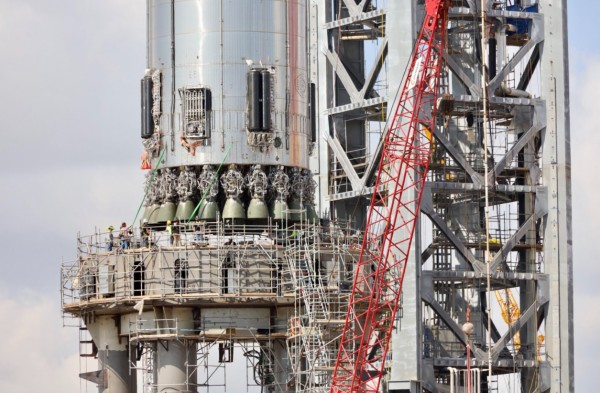 It is apparent that Musk and his companies are focusing on a goal, and that is to be a sustainable producer of leading goods that are needed this time. That is known to be cars for the road and spacecraft for the cosmos.

SpaceX is on a mission to preserve the Earth by having a "backup" of its Biosphere, as well as transforming humans into a multi-planetary species that would not only dwell on the planet. Soon, space tourism will make its debut, and it will bring people to the likes of the Moon and Mars, along with other space destinations.

For now, SpaceX is aiming to make the Starship operational so that it may achieve to bring humans to other planets soon.

Related Article: SpaceX Adds Two Recovery Ships, at Least One to be Used for Inspiration4 Mission