Apple got slapped with a fine for allegedly violating Singapore's strict pandemic rulings.

(Photo : NICHOLAS KAMM/AFP via Getty Images)
The Apple logo is seen at the entrance of an Apple store in Washington, DC, on September 14, 2021. - Apple users were urged on Tuesday to update their devices after the tech giant announced a fix for a major software flaw that allows the Pegasus spyware to be installed on phones without so much as a click.

The company was fined $1,000 for purportedly holding a workplace event at a company store in Orchard Road, Singapore, which occurred last June 18, reports The Straits Times.

Over 50 members of the store's staff gathered at an event to celebrate the final day of another employee at the store, according to the Singapore Tourism Board (STB).

A social gathering of this size is strictly prohibited under the city state's pandemic regulations.

As per the COVID-19 Temporary Measures Control Order Regulations of 2020, any and all businesses who are permitted to operate aren't allowed to hold social events with their employees.

First-time offenders can expect fines of up to $10,000 should they get caught, a jail term of as much as 6 months, or even both.

Repeat offenders can be fined for up to $20,000, serve a 6-month jail sentence, or both. As for why Apple was only fined a minuscule $1,000, though, there's not much detail concerning it.

Singapore has largely reopened its financial and commercial districts since the first half of 2020, which might have led some people to believe that all is well within the state.

However, the government has been reporting rising COVID-19 cases yet again, which is forcing authorities to not rule out re-tightening restrictions, reports Bloomberg.

Apple's Handling of the Pandemic So Far

Apple has strangely not been as enthusiastic about COVID-19 measures compared to its Big Tech counterparts, which has led its top brass to reconsider much of their plans concerning their workforce. 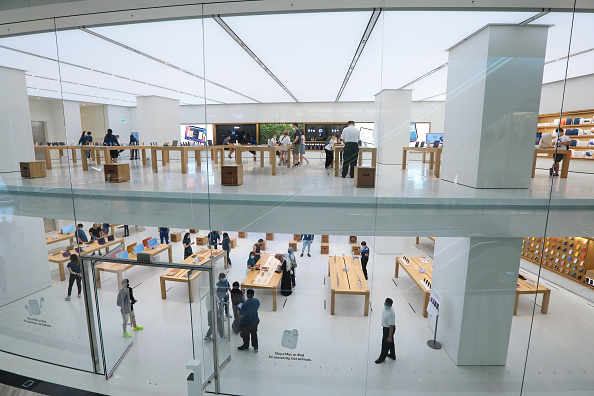 For instance, the tech giant has had to push back a return to office until January 2022, as per a memo sent back in August. This was mainly due to the increasing cases of the extremely transmissible Delta variant.

However, Apple store branches in select cities have notably reopened their doors to customers.

As such, Apple is now planning a work-from-home system for their employees for next month.

Initially, the company hoped to have their workforce return to their offices by September, with a few employees expected to report in person for at least three out of five days a week.

Apple CEO Tim Cook noted that the company still needed to have their workers talk to each other face-to-face, believing it remains essential to the company's goals. This is despite remote work proving effective for Apple as a whole.

Still, it's worth noting that Apple, unlike other tech companies such as Facebook, Google, and Microsoft, are still holding off on implementing vaccine mandates. Their three industry counterparts have already required proof of vaccination for their employees, with Google being the first major tech company to do so, reports NBC News.

In place of the vaccine mandates, Apple has previously said they'll rely on frequent COVID testing instead, with tests being administered as often as twice a week.