The crew members recently shared some of their photos in the cupola of the Dragon capsule spacecraft. 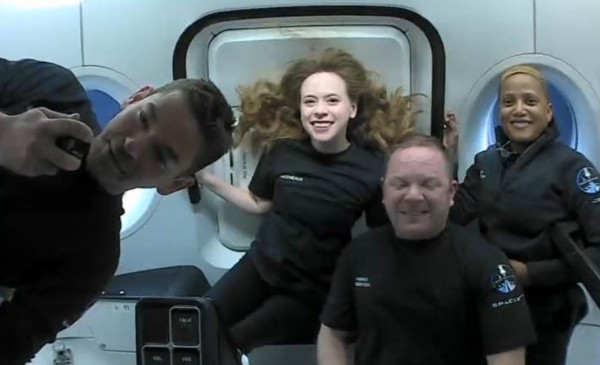 (Photo : Inspiration4 via Twitter)
The SpaceX's Inspiration4 crew members have shared some pictures of them inside the spacecraft's copula.

According to a recent report by Mashable, the members of the Inspiration4 mission toured the viewers about the actual look inside the spacecraft's copula.

Following their success in completing over 15 orbits on the first day of their travel, the crew members have captured the best shots taken from the spacecraft's dome.

Moreover, the group also showed a breathtaking view of the Earth from space.

The four images were shared by the official Twitter account of Inspiration4 on the platform. At the moment, the post has over 48,000 likes and 7,000 retweets from users.

It was a known fact that the Crew Dragon spacecraft could not only carry four people since its limitation is seven passengers. However, SpaceX only restricted the visitors to four.

The crew of #Inspiration4 had an incredible first day in space! They’ve completed more than 15 orbits around planet Earth since liftoff and made full use of the Dragon cupola. pic.twitter.com/StK4BTWSA6

The original outline of the spacecraft does not include the transparent cupola. Instead, the space for it was previously occupied by the docking port.

Since the Inspiration4 crew will not stop in a particular space station, there is no need anymore for that port. SpaceX guarantees that the cupola will be an important part of the crewed mission.

The idea of having four crew members as part of SpaceX's Inspiration space flight was not made by coincidence. The mission has an integral symbolism to all civilians.

In April, we reported that each member has a corresponding value which includes leadership, hope, prosperity, and generosity.

The four-man crewed mission consists of unique individuals who have different roles in life.

The crew was spearheaded by Jared Isaacman who was a billionaire businessman and a pro jet pilot. He was assigned to be Inspiration4's commander.

The other three members are Hayley Arceneaux, a cancer survivor, Dr. Sian Proctor, an educator-entrepreneur, and Chris Sembroski, who is a Lockheed engineer.

In an unusual event, SpaceX's Inspiration4 was able to fly NFTs in space. Some of the items that will be auctioned back to the Earth are non-fungible tokens, a ukulele, and the latest edition of Time Magazine.

Besides breaking barriers of space missions, the group also aims to raise enough funds for the cancer-stricken children in St. Jude Children's Hospital.

There were a total of NFTs that would be auctioned during the space flight. However, only one of them will be carried into space.

In addition to the NFTs and items that will be sent above, the crewed mission will also include 66 pounds of hops brewed by Samuel Adams's brewery.

The brewery owner said that he would donate $100,000 to the children's hospital.

It is expected that the Inspiration4 mission will yield nearly $128 million just from the item auction.

Related Article: SpaceX Inspiration4: What is Their Mission in Their Multi-Day Journey? Is It Streamed Live?